Influence of Maternal Aging on Mitochondrial Heterogeneity, Inheritance, and Function in Oocytes and Preimplantation Embryos
Next Article in Special Issue

Sex chromosomes regularly evolve suppressed recombination, distinguishing them from other chromosomes, and the reason for this has been debated for many years. It is now clear that non-recombining sex-linked regions have arisen in different ways in different organisms. A major hypothesis is that a sex-determining gene arises on a chromosome and that sexually antagonistic (SA) selection (sometimes called intra-locus sexual conflict) acting at a linked gene has led to the evolution of recombination suppression in the region, to reduce the frequency of low fitness recombinant genotypes produced. The sex chromosome system of the guppy (Poecilia reticulata) is often cited as supporting this hypothesis because SA selection has been demonstrated to act on male coloration in natural populations of this fish, and probably contributes to maintaining polymorphisms for the genetic factors involved. I review classical genetic and new molecular genetic results from the guppy, and other fish, including approaches for identifying the genome regions carrying sex-determining loci, and suggest that the guppy may exemplify a recently proposed route to sex chromosome evolution. View Full-Text
Keywords: sexual conflict; sexual dimorphism; genetic sexual conflict; sexual dimorphism; genetic
►▼ Show Figures 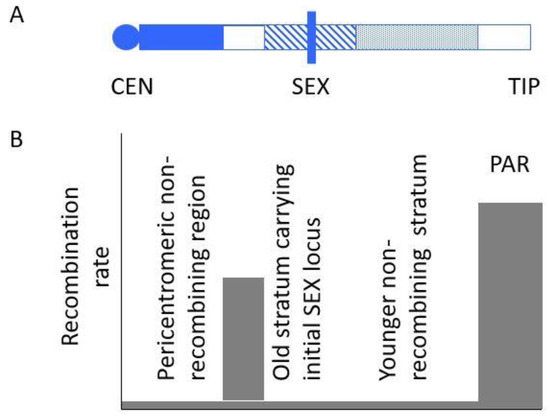