Niemann-Pick type C disease (NPCD) is a lysosomal storage disorder caused by mutations in the NPC1 gene. The most affected tissues are the central nervous system and liver, and while significant efforts have been made to understand its neurological component, the pathophysiology of the liver damage remains unclear. In this study, hepatocytes derived from wild type and Npc1−/− mice were analyzed by mass spectrometry (MS)-based proteomics in conjunction with bioinformatic analysis. We identified 3832 proteins: 416 proteins had a p-value smaller than 0.05, of which 37% (n = 155) were considered differentially expressed proteins (DEPs), 149 of them were considered upregulated, and 6 were considered downregulated. We focused the analysis on pathways related to NPC pathogenic mechanisms, finding that the most significant changes in expression levels occur in proteins that function in the pathways of liver damage, lipid metabolism, and inflammation. Moreover, in the group of DEPs, 30% (n = 47) were identified as lysosomal proteins and 7% (n = 10) were identified as mitochondrial proteins. Importantly, we found that lysosomal DEPs, including CTSB/D/Z, LIPA, DPP7 and GLMP, and mitocondrial DEPs, AKR1B10, and VAT1 had been connected with liver fibrosis, damage, and steatosis in previous studies, validiting our dataset. Our study found potential therapeutic targets for the treatment of liver damage in NPCD. View Full-Text
Keywords: liver damage; Niemann Pick type C disease; lysosomal storage disorder; proteomic analysis; mass spectrometry liver damage; Niemann Pick type C disease; lysosomal storage disorder; proteomic analysis; mass spectrometry
►▼ Show Figures 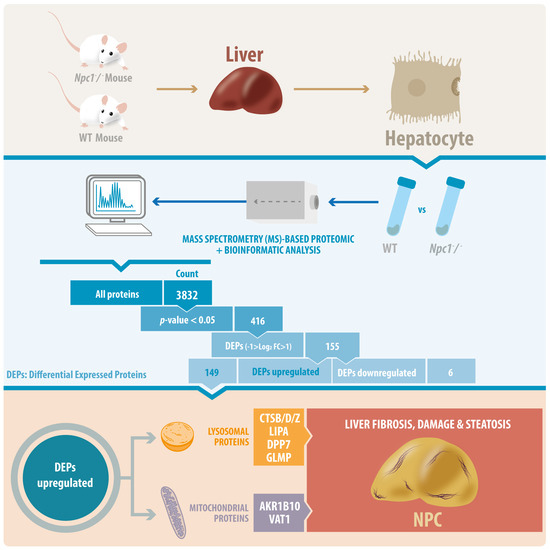