Efficient Protocol for the In Vitro Plantlet Production of Caper (Capparis orientalis Veill.) from the East Adriatic Coast

Caper (Capparis orientalis Veill.) is a species rich in bioactive compounds, with positive effects on human health. It has a great adaptability to harsh environments and an exceptional ability to extract water from dry soils. In Croatia, the caper grows as a wild plant, and its cultivation is insignificant, which is probably due to propagation difficulties. Micropropagation could be a solution for this. The aim of this study was to investigate the success of the micropropagation, in vitro rooting, and acclimatization of Capparis orientalis Veill. Shoot proliferation was tested in a Murashige and Skoog (MS) medium, with sucrose or glucose, and in 13 treatments, presenting the combined effect of different cytokinins and their concentrations. The success of rooting was examined in relation to the impact of various auxins, durations of rooting, and carry-over effects. A better proliferation was achieved when sucrose was used. The highest number (18) of shoots/explants was obtained in the medium supplemented with 0.6 mg·L−1 meta-topolin, while the rooting was equally efficient in the media supplemented with 2 mg·L−1 of indole-3-acetic acid or indole-3-butyric acid, or in hormone-free rooting medium. A prolonged time in the media increased the rooting efficiency, while the carry-over effect had no influence. The acclimatization rate reached 66%. Additional efforts should be made to find out how to speed upthe rooting and enhance the acclimatization rate of caper grown in Croatia. View Full-Text
Keywords: caper; micropropagation; rooting; cytokinins; auxins caper; micropropagation; rooting; cytokinins; auxins
►▼ Show Figures 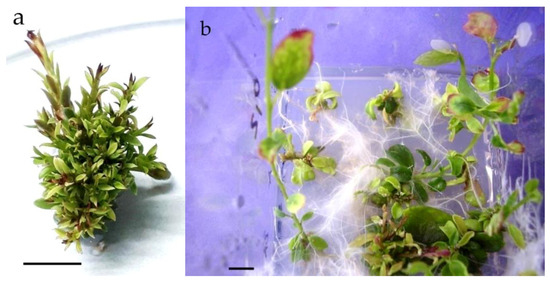