Effect of Ulvan on the Biocontrol Activity of Debaryomyces hansenii and Stenotrophomonas rhizophila against Fruit Rot of Cucumis melo L.
Previous Article in Special Issue

Unveiling the Enigmatic Structure of TdCMO Transcripts in Durum Wheat

Drought and high temperature are two major factors limiting maize productivity in sub-Saharan Africa. An increase in temperature above 30 °C reduces yield by 1% under optimal rain-fed condition and by 1.7% under drought stress (DS) and up to 40% under combined drought and heat stress (DSHTS). Approaches that improve performance under the two stresses are essential to sustain productivity. The objectives of this study were to (i) assess the extent of variation in tolerance to DSHTS from among the existing best drought tolerant (DT) hybrids; (ii) examine the response patterns of the hybrids to DSHTS; (iii) identify traits that contributed to better performance under DSHTS; and (iv) select the best hybrids with tolerance to DSHTS stress. We evaluated 40 DT hybrids under DSHTS, DS, and well-watered (WW) conditions for three years. Highly significant (p < 0.001) differences were found among hybrids for grain yield and other traits. Moderately to low repeatability values were detected for grain yield under DS (0.63) and under DSHTS (0.48). Grain yield under DS was not correlated with grain yield under DSHTS (r = 0.29; p = 0.06), but it was correlated with grain yield under WW (r = 0.74; p < 0.001). Grain yield was strongly correlated with ears per plant, ear and pant aspects, days to anthesis and silking under both DS and DSHTS. Tassel blast accounted for 28% of the yield reduction under DSHTS. The top five DT hybrids produced 9 to 26% more grain yields than the best commercial hybrid. Three hybrids produced high grain yields under DTHTS and DS as well as under WW. These hybrids will be tested further in collaboration with partners for possible release. View Full-Text
Keywords: combined drought and heat stress; drought tolerant; grain yield; three-way cross hybrids combined drought and heat stress; drought tolerant; grain yield; three-way cross hybrids
►▼ Show Figures 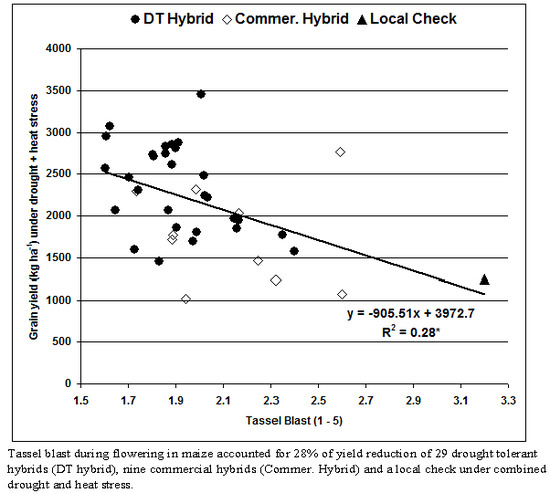