Dielectric elastomer actuators (DEAs) are known as a type of electric-driven artificial muscle that have shown promising potential in the field of soft robotics. However, the inherent viscoelastic nonlinearity makes the modeling and control of DEAs challenging. In this paper, we propose a new phenomenological modeling approach with the Prandtl–Ishlinskii (P–I) model to characterize the viscoelastic hysteresis nonlinearity of DEAs. Differently from the commonly used physics-based models, the developed phenomenological model, called the modified rate-dependent P–I model (MRPIM), produces behavior similar to that of physics-based models but without necessarily considering physical insight into the modeling problem. In this way, the developed MRPIM can characterize the asymmetric and rate-dependent viscoelastic hysteresis with a relative simple mathematical format using only the experimental data. To validate the development, experimental tests were conducted with seven different frequencies; four were selected to identify the model parameters and the rest of the data were used to further verify the model. Comparisons between the model prediction and experimental data demonstrate that the MRPIM can precisely describe the viscoelastic hysteresis effect of DEAs with a maximum prediction error of 9.03% and root-mean-square prediction error of 4.50%. View Full-Text
Keywords: dielectric elastomer actuators; viscoelastic hysteresis nonlinearity; phenomenal modeling approach; modified Prandtl–Ishlinskii model dielectric elastomer actuators; viscoelastic hysteresis nonlinearity; phenomenal modeling approach; modified Prandtl–Ishlinskii model
►▼ Show Figures 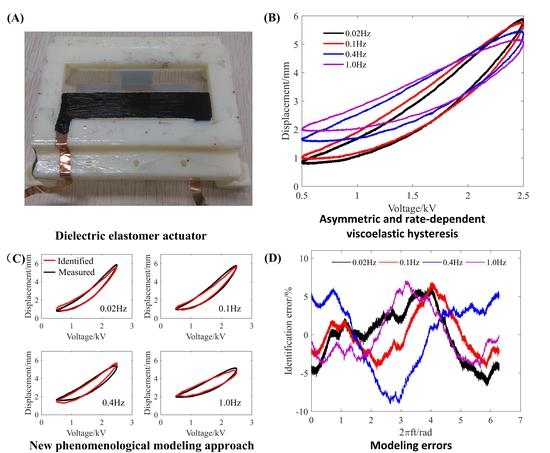