Use of Lactobacillus rhamnosus (ATCC 53103) as Whole-Cell Biocatalyst for the Regio- and Stereoselective Hydration of Oleic, Linoleic, and Linolenic Acid

Natural hydroxy fatty acids are relevant starting materials for the production of a number of industrial fine chemicals, such as different high-value flavour ingredients. Only a few of the latter hydroxy acid derivatives are available on a large scale. Therefore, their preparation by microbial hydration of unsaturated fatty acids, affordable from vegetable oils, is a new biotechnological challenge. In this study, we describe the use of the probiotic bacterium Lactobacillus rhamnosus (ATCC 53103) as whole-cell biocatalyst for the hydration of the most common unsaturated octadecanoic acids, namely oleic acid, linoleic acid, and linolenic acid. We discovered that the addition of the latter fatty acids to an anaerobic colture of the latter strain, during the early stage of its exponential growth, allows the production of the corresponding mono-hydroxy derivatives. In these experimental conditions, the hydration reaction proceeds with high regio- and stereoselectivity. Only 10-hydroxy derivatives were formed and the resulting (R)-10-hydroxystearic acid, (S)-(12Z)-10-hydroxy-octadecenoic acid, and (S)-(12Z,15Z)-10-hydroxy-octadecadienoic acid were obtained in very high enantiomeric purity (ee > 95%). Although overall conversions usually do not exceed 50% yield, our biotransformation protocol is stereoselective, scalable, and holds preparative significance. View Full-Text
Keywords: hydratase; oleic acid; linoleic acid; linolenic acid; hydroxy fatty acids; stereoselective biotransformation; Lactobacillus rhamnosus hydratase; oleic acid; linoleic acid; linolenic acid; hydroxy fatty acids; stereoselective biotransformation; Lactobacillus rhamnosus
►▼ Show Figures 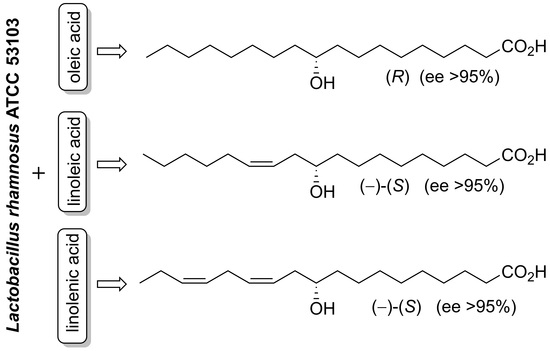