Trends in Treatment of Head and Neck Cancer in Germany: A Diagnosis-Related-Groups-Based Nationwide Analysis, 2005–2018
Next Article in Special Issue

Ovarian cancer has remained the leading cause of death among gynecologic malignancies. The current standard of treatment, in most cases, is a combination of surgery and chemotherapy, based on platinum agents and taxanes. Despite the increasing usage of newer drug groups, such as bevacizumab and PARP inhibitors, and the expansion of patient groups for these drugs, ovarian cancer is characterized by recurrences, particularly in the form of peritoneal implants. This review focuses on immunotherapy for ovarian cancer. It considers the current state of knowledge in areas such as cancer vaccines, adoptive cell therapy, CAR-T therapy, and anti-CTLA-4 monotherapy. The paper specifically considers PD-1/PDL-1 as drug targets. Anti-PD-1/PD-L1 monotherapy, and anti-PD-1/PD-L1 immunotherapy in combination with other agents, are analyzed.

Ovarian cancer is one of the most fatal cancers in women worldwide. Cytoreductive surgery combined with platinum-based chemotherapy has been the current first-line treatment standard. Nevertheless, ovarian cancer appears to have a high recurrence rate and mortality. Immunological processes play a significant role in tumorigenesis. The production of ligands for checkpoint receptors can be a very effective, and undesirable, immunosuppressive mechanism for cancers. The CTLA-4 protein, as well as the PD-1 receptor and its PD-L1 ligand, are among the better-known components of the control points. The aim of this paper was to review current research on immunotherapy in the treatment of ovarian cancer. The authors specifically considered immune checkpoints molecules such as PD-1/PDL-1 as targets for immunotherapy. We found that immune checkpoint-inhibitor therapy does not have an improved prognosis in ovarian cancer; although early trials showed that a combination of anti-PD-1/PD-L1 therapy with targeted therapy might have the potential to improve responses and outcomes in selected patients. However, we must wait for the final results of the trials. It seems important to identify a group of patients who could benefit significantly from treatment with immune checkpoints inhibitors. However, despite numerous trials, ICIs have not become part of routine clinical practice for the treatment of ovarian cancer. View Full-Text
Keywords: immunotherapy; immune checkpoint; checkpoint inhibitor; ovarian cancer; PDL-1; PD-1 immunotherapy; immune checkpoint; checkpoint inhibitor; ovarian cancer; PDL-1; PD-1
►▼ Show Figures 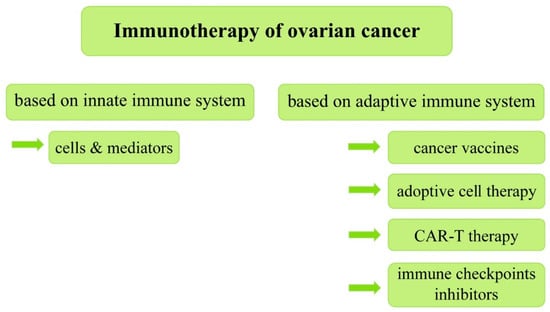