Structure-Based Design of Ricin Inhibitors
Next Article in Special Issue

Trichoderma brevicompactum IBT 40841 produces trichodermin, a trichothecene-type toxin that shares most of the steps of its biosynthesis with harzianum A, another trichothecene produced by several Trichoderma species. The first specific step in the trichothecene biosynthesis is carried out by a terpene cylcase, trichodiene synthase, that catalyzes the conversion of farnesyl pyrophosphate to trichodiene and that is encoded by the tri5 gene. Overexpression of tri5 resulted in increased levels of trichodermin production, but also in an increase in tyrosol and hydroxytyrosol production, two antioxidant compounds that may play a regulatory role in trichothecene biosynthesis, and also in a higher expression of three trichothecene genes, tri4, tri6 and tri10, and of the erg1 gene, which participates in the synthesis of triterpenes. The effect of tri5 overexpression on tomato seedling disease response was also studied. View Full-Text
Keywords: trichothecene; terpene; tyrosol; tri genes; ergosterol; gene expression trichothecene; terpene; tyrosol; tri genes; ergosterol; gene expression
►▼ Show Figures 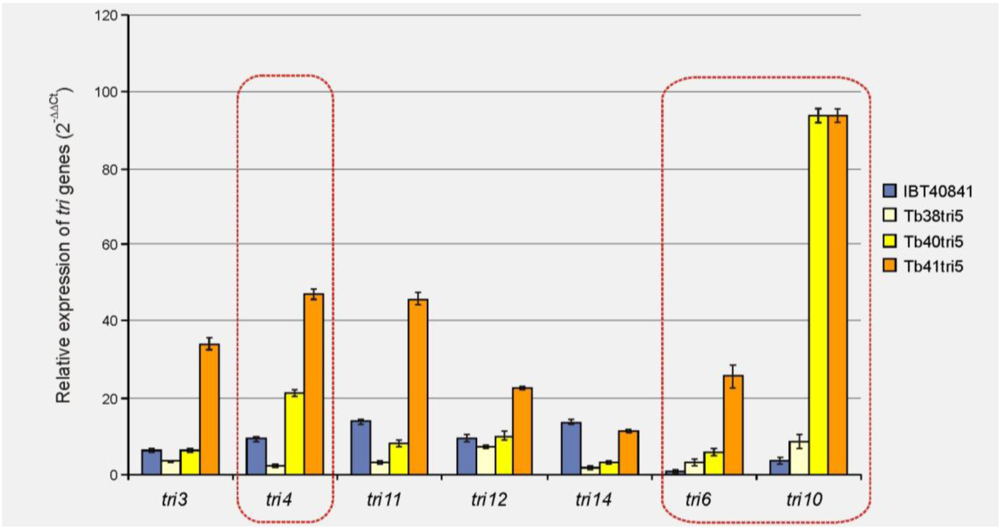