Botulinum toxin type A (BTA) injection is considered an available alternative treatment for myofascial pain. However, its efficacy in treating masticatory myofascial pain syndrome (MMPS) remains unclear. The purpose of this study was to evaluate whether the BTA injection into the affected muscles would significantly reduce pain and improve function, and to assess its efficacy, safety, and therapeutic indications in a randomized, single-center clinical trial. Sixty patients with MMPS were randomized into three groups evenly to receive a single session injection of saline solution (SS group), lidocaine (LD group), and BTA (BTA group) in the masseter, temporal, and pterygoid muscles after an electromyographic study. Patients’ pain was classified as localized or referred according to the DC/TMD classification. Assessments were performed on pre-treatment, and subsequently, on days 7, 14, 28, 60, 90, and 180. A significant reduction in pain and improvement of mandibular movements was found in the BTA group compared to the SS and LD groups. The response lasted until day 180 and was more intense in patients with localized myalgia and focused myofascial pain than in referred remote pain. No significant adverse reactions were observed. A single BTA injection can be considered an effective treatment option in patients with localized MMPS by reducing pain and improving mandibular movements, which persisted up to 6 months. View Full-Text
Keywords: temporomandibular disorders; masticatory myofascial pain syndrome; botulinum toxin; randomized controlled trial temporomandibular disorders; masticatory myofascial pain syndrome; botulinum toxin; randomized controlled trial
►▼ Show Figures 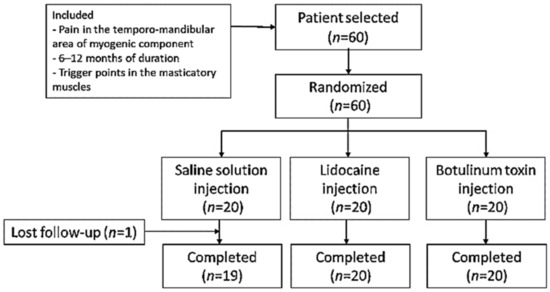