New Evaluation of Isoflavone Exposure in the French Population

The study relates the present evaluation of exposure to estrogenic isoflavones of French consumers through two approaches: (1) identification of the isoflavone sources in the French food offering, (2) a consumption-survey on premenopausal women. For the foodstuff approach 150 food-items were analysed for genistein and daidzein. Additionally, 12,707 labels of processed-foods from French supermarket websites and a restaurant-supplier website were screened, and 1616 foodstuffs of interest were retained. The sources of phytoestrogens considered were soy, pea, broad bean and lupine. A price analysis was performed. A total of 270 premenopausal women from the French metropolitan territory were interviewed for their global diet habits and soy consumption and perception. In supermarkets, there were significantly less selected foodstuffs containing soy than in restaurant (11.76% vs. 25.71%, p < 0.01). There was significantly more soy in low price-foodstuff in supermarket (p < 0.01). Isoflavone levels ranged from 81 to 123,871 µg per portion of the analyzed soy containing foodstuff. Among the women inquired 46.3% claimed to have soy regularly. Isoflavone intake >45 mg/day is associated to vegan-diet (p < 0.01). In total, 11.9% of soy-consumers had a calculated isoflavone intake >50 mg/day. This dose can lengthen the menstrual cycles. The actual exposure to phytoestrogen is likely to have an effect in a part of the French population. View Full-Text
Keywords: exposure; foodstuff labelling; legumes; isoflavones; phytoestrogens; premenopausal women; health; endocrine disruptors exposure; foodstuff labelling; legumes; isoflavones; phytoestrogens; premenopausal women; health; endocrine disruptors
►▼ Show Figures 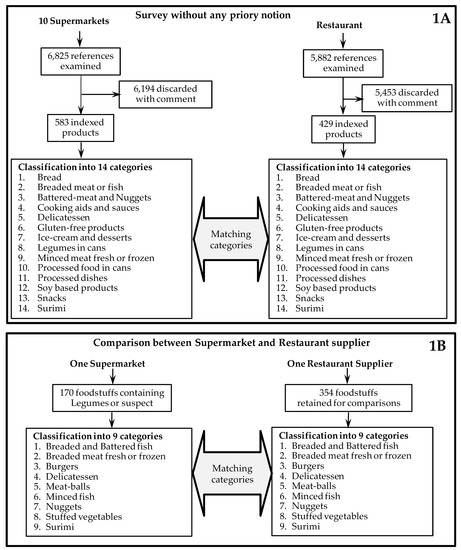