Meat, Meat Products and Seafood as Sources of Energy and Nutrients in the Average Polish Diet
Previous Article in Special Issue

Purported benefits of long chain omega-3 polyunsaturated fatty acid (LCn-3PUFA) for brain function may be attributable, at least in part, to improved cerebral perfusion. A pilot randomised controlled trial was undertaken to investigate effects of taking a DHA-rich fish oil supplement for 20 weeks on cerebrovascular function, mood and cognitive performance. Borderline hypertensives aged 40–85 years with low habitual LCn-3PUFA intake took four capsules/day of EPAX (1600 mg DHA + 400 mg EPA) or placebo (corn oil). Cerebrovascular function was assessed at baseline and after 20 weeks in 38 completers (19 on each supplement) using transcranial Doppler ultrasound of blood flow in the middle cerebral artery at rest and whilst performing a battery of cognitive tasks (neurovascular coupling). The primary outcome, cerebrovascular responsiveness (CVR) to hypercapnia, increased 26% (p = 0.024) in women; there was no change in men. In contrast, neurovascular coupling increased significantly (p = 0.01 for the overall response) in men only; the latter correlated with an increase of EPA in erythrocytes (r = 0.616, p = 0.002). There was no associated improvement of mood or cognition in either men or women. These preliminary observations indicate that LCn-3PUFA supplementation has the potential to enhance blood flow in the brain in response to both hypercapnic and cognitive stimuli. Future studies should examine differential effects of EPA and DHA and take account of the gender differences in responsiveness to supplementation. View Full-Text
Keywords: cerebrovascular function; cognition; mood; cerebral blood flow; omega-3; hypertension cerebrovascular function; cognition; mood; cerebral blood flow; omega-3; hypertension
►▼ Show Figures 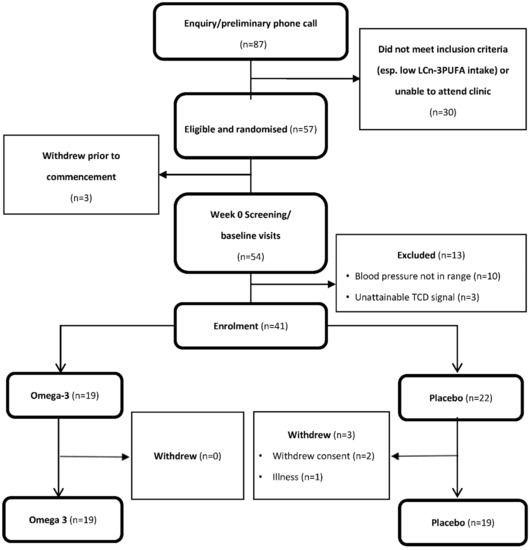