As the largest developing country, China has experienced dramatic urban expansion since the “reform and opening-up” policy started at the end of the 1970s. In this paper, we monitor three decades of urban expansion in China’s 36 major cities, based on the spectral mixture analysis of remotely sensed satellite images. The results demonstrated that these major cities have expanded by 5.85 times from 1986 to 2015, with 15.51 km2 average expansion area per city per year. We found the urban expansion trajectories showed three different modes, i.e., exponential, linear and s-shaped, which were closely related to the city development level. In the old city zones, however, there was an interesting common tendency of the impervious surface area (ISA) first increasing and then decreasing, which could be largely attributed to the phenomenon of urban village reconstruction in China’s cities. Based on the Granger Causality Test (GCT), the interaction between urban ISA and Gross Domestic Product (GDP) per capita (GDPPC) suggested that the former was the driver of the latter. Meanwhile, taking the Yangtze River as the division between north and south China, there exists a north–south territorial differentiation for the interaction between ISA and total population at the year-end (TP). View Full-Text
Keywords: urbanization; satellite remote sensing; urban expansion trajectories; urban village; north-south differentiation urbanization; satellite remote sensing; urban expansion trajectories; urban village; north-south differentiation
►▼ Show Figures 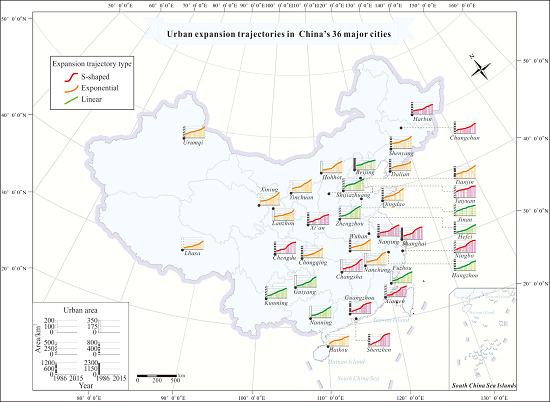