Monitoring soil moisture at the Earth’surface is of great importance for drought early warnings. Spaceborne remote sensing is a keystone in monitoring at continental scale, as satellites can make observations of locations which are scarcely monitored by ground-based techniques. In recent years, several soil moisture products for continental scale monitoring became available from the main space agencies around the world. Making use of sensors aboard polar satellites sampling in the microwave spectrum, soil moisture can be measured and mapped globally every few days at a spatial resolution as fine as 25 km. However, complementarity of satellite observations is a crucial issue to improve the quality of the estimations provided. In this context, measurements within the visible and infrared from geostationary satellites provide information on the surface from a totally different perspective. In this study, we design a new retrieval algorithm for daily soil moisture monitoring based only on the land surface temperature observations derived from the METEOSAT second generation geostationary satellites. Soil moisture has been retrieved from the retrieval algorithm for an eight years period over Europe and Africa at the SEVIRI sensor spatial resolution (3 km at the sub-satellite point). The results, only available for clear sky and partly cloudy conditions, are for the first time extensively evaluated against in-situ observations provided by the International Soil Moisture Network and FLUXNET at sites across Europe and Africa. The soil moisture retrievals have approximately the same accuracy as the soil moisture products derived from microwave sensors, with the most accurate estimations for semi-arid regions of Europe and Africa, and a progressive degradation of the accuracy towards northern latitudes of Europe. Although some possible improvements can be expected by a better use of other products derived from SEVIRI, the new approach developped and assessed here is a valuable alternative to microwave sensors to monitor daily soil moisture at the resolution of few kilometers over entire continents and could reveal a good complementarity to an improved monitoring system, as the algorithm can produce surface soil moisture with less than 1 day delay over clear sky and non-steady cloudy conditions (over 10% of the time). View Full-Text
Keywords: soil moisture; geostationary; validation; SEVIRI; thermal infrared; land surface temperature soil moisture; geostationary; validation; SEVIRI; thermal infrared; land surface temperature
►▼ Show Figures 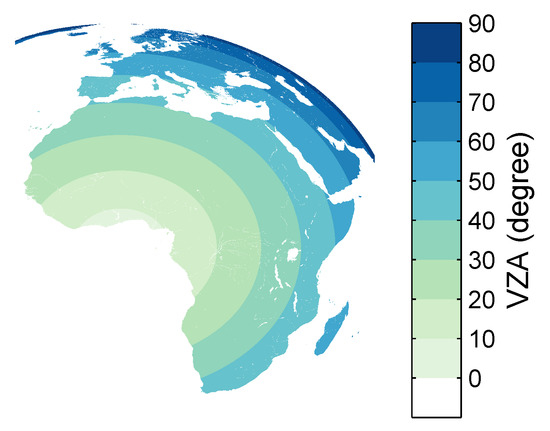