The waveform retracking algorithm is a key factor that affects the accuracy of elevation change from satellite altimetry over an ice sheet. The elevation change results from four waveform retracker algorithms (ICE1/ICE2/Sea Ice/OCEAN) provided by the Satellite with ARgos and ALtiKa (SARAL/ALtiKa) data were compared using repeated SARAL data between March 2013 and April 2016 to determine the optimal retracker in the crossovers of descending and ascending orbits over a Greenland ice sheet (GrIS). The ICE1 provided slightly better results than the three other algorithms with the lowest standard deviation (SD) of 0.30 m year−1. Further comparison was also conducted between the Satellite with ARgos and ALtiKa (SARAL) and Operation ICEBridge laser data, thereby indicating that ICE1 was the best retracker with an Root Mean Square Error (RMSE) of 0.43 m year−1. The distribution of elevation change rate and uncertainties over Greenland from SARAL were presented using the selected ICE1 retracker with a volume loss of 40 12 km3 year−1. This volume loss did not include the fast-changing coastal areas of the GrIS. A large thinning was observed in Jakobshavn Isbræ, and a trend that extended far inland was also found from 2013–2016. Furthermore, a melting ice sheet was observed in the large areas northwest over the GrIS. View Full-Text
Keywords: waveform retracking; ICEBridge; SARAL; elevation change; Greenland; slope waveform retracking; ICEBridge; SARAL; elevation change; Greenland; slope
►▼ Show Figures 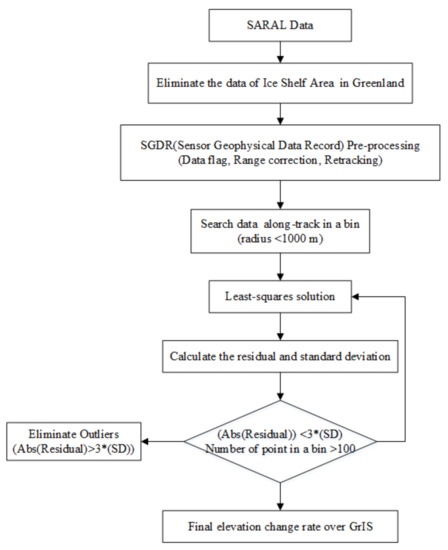