Ground Deformations around the Toktogul Reservoir, Kyrgyzstan, from Envisat ASAR and Sentinel-1 Data—A Case Study about the Impact of Atmospheric Corrections on InSAR Time Series

We present ground deformations in response to water level variations at the Toktogul Reservoir, located in Kyrgyzstan, Central Asia. Ground deformations were measured by Envisat Advanced Synthetic Aperture Radar (ASAR) and Sentinel-1 Differential Interferometric Synthetic Aperture Radar (DInSAR) imagery covering the time periods 2004–2009 and 2014–2016, respectively. The net reservoir water level, as measured by satellite radar altimetry, decreased approximately 60 m (∼13.5 km3) from 2004–2009, whereas, for 2014–2016, the net water level increased by approximately 51 m (∼11.2 km3). The individual Small BAseline Subset (SBAS) interferograms were heavily influenced by atmospheric effects that needed to be minimized prior to the time-series analysis. We tested several approaches including corrections based on global numerical weather model data, such as the European Centre for Medium-RangeWeather Forecasts (ECMWF) operational forecast data, the ERA-5 reanalysis, and the ERA-Interim reanalysis, as well as phase-based methods, such as calculating a simple linear dependency on the elevation or the more sophisticated power-law approach. Our findings suggest that, for the high-mountain Toktogul area, the power-law correction performs the best. Envisat descending time series for the period of water recession reveal mean line-of-sight (LOS) uplift rates of 7.8 mm/yr on the northern shore of the Toktogul Reservoir close to the Toktogul city area. For the same area, Sentinel-1 ascending and descending time series consistently show a subsidence behaviour due to the replenishing of the water reservoir, which includes intra-annual LOS variations on the order of 30mm. A decomposition of the LOS deformation rates of both Sentinel-1 orbits revealed mean vertical subsidence rates of 25 mm/yr for the common time period of March 2015–November 2016, which is in very good agreement with the results derived from elastic modelling based on the TEA12 Earth model. View Full-Text
Keywords: DInSAR; SBAS; ground deformation; atmosphere correction; elastic modelling; reservoir monitoring; Toktogul Reservoir DInSAR; SBAS; ground deformation; atmosphere correction; elastic modelling; reservoir monitoring; Toktogul Reservoir
►▼ Show Figures 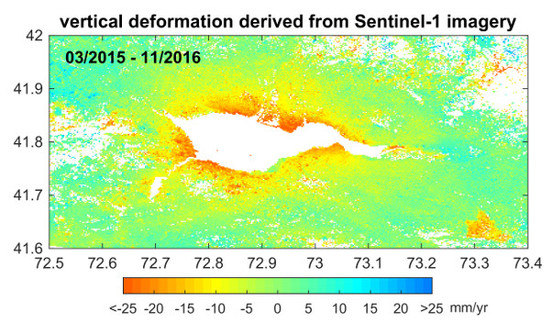