The objective was to validate the carbon monoxide (CO) total column product inferred from Scanning Imaging Absorption Spectrometer for Atmospheric Chartography (SCIAMACHY) full-mission (2003–2011) short-wave infrared (SWIR) nadir observations using the Beer InfraRed Retrieval Algorithm (BIRRA). Globally distributed Network for the Detection of Atmospheric Composition Change (NDACC) and Total Carbon Column Observing Network (TCCON) ground-based (g-b) measurements were used as a true reference. Weighted averages of SCIAMACHY CO observations within a circle around the g-b observing system were utilized to minimize effects due to spatial mismatch of space-based (s-b) and g-b observations, i.e., disagreements due to representation errors rather than instrument and/or algorithm deficiencies. In addition, temporal weighted averages were examined and then the unweighted (classical) approach was compared to the weighted (non-classical) method. The delivered distance-based filtered SCIAMACHY data were in better agreement with respect to CO averages as compared to square-shaped sampling areas throughout the year. Errors in individual SCIAMACHY retrievals have increased substantially since 2005. The global bias was determined to be in the order of parts per billion in volume (ppbv) depending on the reference network and validation strategy used. The largest negative bias was found to occur in the northern mid-latitudes in Europe and North America, and was partly caused by insufficient a priori estimates of CO and cloud shielding. Furthermore, no significant trend was identified in the global bias throughout the mission. The global analysis of the CO columns retrieved by the BIRRA shows results that are largely consistent with similar investigations in previous works. View Full-Text
Keywords: SCIAMACHY; BIRRA; NDACC; TCCON; validation; retrieval; carbon monoxide; mixing ratios; weighted averages SCIAMACHY; BIRRA; NDACC; TCCON; validation; retrieval; carbon monoxide; mixing ratios; weighted averages
►▼ Show Figures 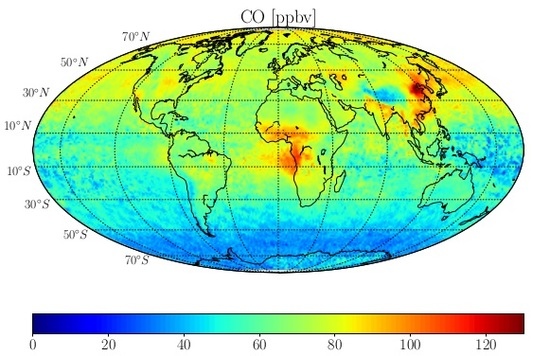