Port Waste Management in the Baltic Sea Area: A Four Port Study on the Legal Requirements, Processes and Collaboration
Previous Article in Journal

Collaborative Consumption: A Proposed Scale for Measuring the Construct Applied to a Carsharing Setting

We present a new reconstruction of summer sea-surface temperature (SST) variations over the past 5000 years based on a diatom record from gravity core DA06-139G, from Vaigat Strait in Disko Bugt, West Greenland. Summer SST varied from 1.4 to 5 °C, and the record exhibits an overall decreasing temperature trend. Relatively high summer SST occurred prior to 3000 cal. a BP, representing the end of the Holocene Thermal Maximum. After the beginning of the “Neoglaciation” at approximately 3000 cal. a BP, Vaigat Strait experienced several hydrographical changes that were closely related to the general climatic and oceanographic evolution of the North Atlantic region. Distinct increases in summer SST in Vaigat Strait occurred from 2000 to 1600 cal. a BP and from 1200 to 630 cal. a BP, and are consistent with the “Roman Warm Period” and the “Mediaeval Warm Period” in the North Atlantic region. The summer SST decreased significantly during 1500~1200 cal. a BP and 630~50 cal. a BP, corresponding, respectively, to the Northeast Atlantic cooling episodes known as the “European Dark Ages” and “Little Ice Age”. Spectral and cross-correlation analyses indicate that centennial-scale oscillations in summer SST are superimposed on the long-term trend. The dominant periodicities are centered at 529, 410, and 191 years, which are close to the ubiquitous 512 and 206-year 14C cycle, suggesting that solar forcing may play an important role in summer SST variability in Disko Bugt. View Full-Text
Keywords: diatoms; sea-surface temperature; transfer function; West Greenland; Holocene diatoms; sea-surface temperature; transfer function; West Greenland; Holocene
►▼ Show Figures 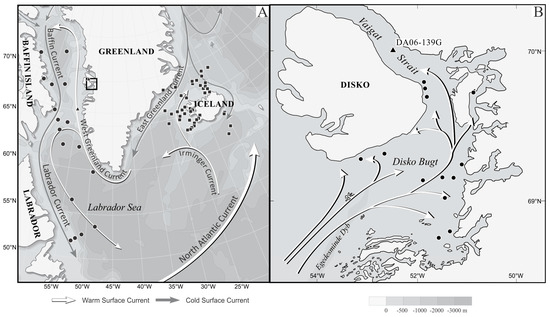