Places to Intervene in a Socio-Ecological System: A Blueprint for Transformational Change
Previous Article in Journal

Financial Literacy and Exercise Behavior in the United States

Much attention has been paid to rechargeable lithium-sulfur batteries (Li–SBs) due to their high theoretical specific capacity, high theoretical energy density, and affordable cost. However, their rapid c fading capacity has been one of the key defects in their commercialization. It is believed that sulfuric cathode degradation is driven mainly by passivation of the cathode surface by Li2S at discharge, polysulfide shuttle (reducing the amount of active sulfur at the cathode, passivation of anode surface), and volume changes in the sulfuric cathode. These degradation mechanisms are significant during cycling, and the polysulfide shuttle is strongly present during storage at a high state-of-charge (SOC). Thus, storage at 50% SOC is used to evaluate the effect of the remaining degradation processes on the cell’s performance. In this work, unlike most of the other previous observations that were performed at small-scale cells (coin cells), 3.4 Ah pouch Li–SBs were tested using cycling and calendar aging protocols, and their performance indicators were analyzed. As expected, the fade capacity of the cycling aging cells was greater than that of the calendar aging cells. Additionally, the measurements for the calendar aging cells indicate that, contrary to the expectation of stopping the solubility of long-chain polysulfides and not attending the shuttle effect, these phenomena occur continuously under open-circuit conditions. View Full-Text
Keywords: lithium-sulfur batteries; calendar aging; cycling aging lithium-sulfur batteries; calendar aging; cycling aging
►▼ Show Figures 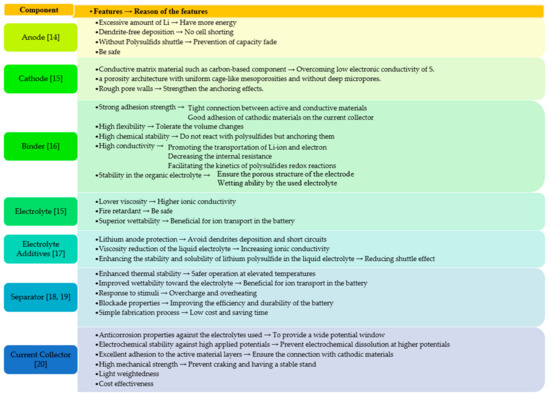