The Impact of Organic Fertilizer Produced with Vegetable Residues in Lettuce (Lactuca sativa L.) Cultivation and Antioxidant Activity
Next Article in Special Issue

The Impact of the COVID-19 Emergency on Local Vehicular Traffic and Its Consequences for the Environment: The Case of the City of Reggio Emilia (Italy)
Previous Article in Special Issue

Access and Use of Green Areas during the COVID-19 Pandemic: Green Infrastructure Management in the “New Normal”

How Blue Carbon Ecosystems Are Perceived by Local Communities in the Coral Triangle: Comparative and Empirical Examinations in the Philippines and Indonesia

Blue carbon ecosystem (BCE) initiatives in the Coral Triangle Region (CTR) are increasing due to their amplified recognition in mitigating global climate change. Although transdisciplinary approaches in the “blue carbon” discourse and collaborative actions are gaining momentum in the international and national arenas, more work is still needed at the local level. The study pursues how BCE initiatives permeate through the local communities in the Philippines and Indonesia, as part of CTR. Using perception surveys, the coastal residents from Busuanga, Philippines, and Karimunjawa, Indonesia were interviewed on their awareness, utilization, perceived threats, and management strategies for BCEs. Potential factors affecting residents’ perceptions were explored using multivariate regression and correlation analyses. Also, a comparative analysis was done to determine distinctions and commonalities in perceptions as influenced by site-specific scenarios. Results show that, despite respondents presenting relatively high awareness of BCE services, levels of utilization are low with 42.9–92.9% and 23.4–85.1% respondents in Busuanga and Karimunjawa, respectively, not directly utilizing BCE resources. Regression analysis showed that respondents’ occupation significantly influenced their utilization rate and observed opposite correlations in Busuanga (positive) and Karimunjawa (negative). Perceived threats are found to be driven by personal experiences—occurrence of natural disasters in Busuanga whereas discerned anthropogenic activities (i.e., land-use conversion) in Karimunjawa. Meanwhile, recognized management strategies are influenced by the strong presence of relevant agencies like non-government and people’s organizations in Busuanga and the local government in Karimunjawa. These results can be translated as useful metrics in contextualizing and/or enhancing BCE management plans specifically in strategizing advocacy campaigns and engagement of local stakeholders across the CTR. View Full-Text
Keywords: blue carbon ecosystems; coral triangle; Philippines; Indonesia; local perceptions blue carbon ecosystems; coral triangle; Philippines; Indonesia; local perceptions
►▼ Show Figures 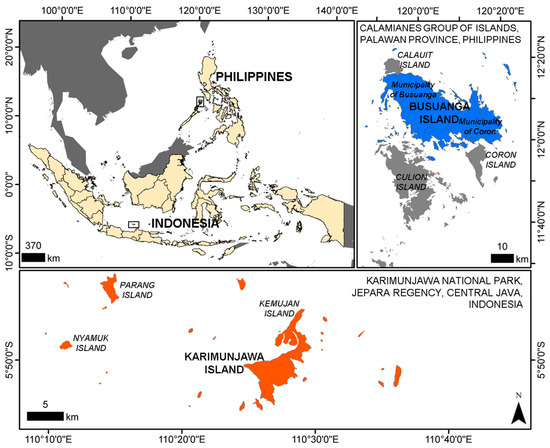 
Quevedo, Jay M.D., Yuta Uchiyama, Kevin Muhamad Lukman, and Ryo Kohsaka. 2021. "How Blue Carbon Ecosystems Are Perceived by Local Communities in the Coral Triangle: Comparative and Empirical Examinations in the Philippines and Indonesia" Sustainability 13, no. 1: 127. https://doi.org/10.3390/su13010127