This study downscales the population and gross domestic product (GDP) scenarios given under Shared Socioeconomic Pathways (SSPs) into 0.5-degree grids. Our downscale approach has the following features. (i) It explicitly considers spatial and socioeconomic interactions among cities, (ii) it utilizes auxiliary variables, including road network and land cover, (iii) it endogenously estimates the influence from each factor by a model ensemble approach, and (iv) it allows us to control urban shrinkage/dispersion depending on SSPs. It is confirmed that our downscaling results are consistent with scenario assumptions (e.g., concentration in SSP1 and dispersion in SSP3). Besides, while existing grid-level scenarios tend to have overly-smoothed population distributions in nonurban areas, ours does not suffer from the problem, and captures the difference in urban and nonurban areas in a more reasonable manner. Our gridded dataset, including population counts and gross productivities by 0.5 degree grids by 10 years, are available from http://www.cger.nies.go.jp/gcp/population-and-gdp.html. View Full-Text
Keywords: shared socioeconomic pathways; downscale; spatial econometrics; population; GDP; ensemble learning shared socioeconomic pathways; downscale; spatial econometrics; population; GDP; ensemble learning
►▼ Show Figures 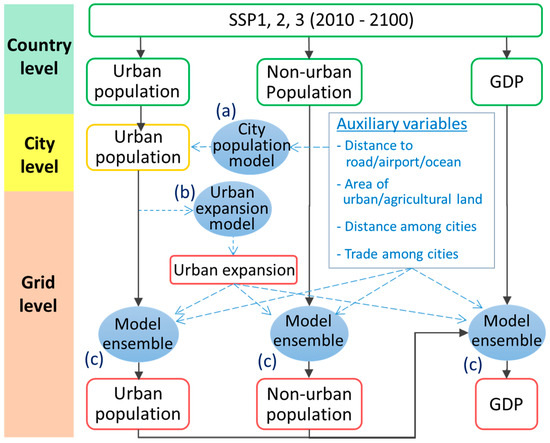