The Impacts of Landscape Changes on Annual Mean Land Surface Temperature in the Tropical Mountain City of Sri Lanka: A Case Study of Nuwara Eliya (1996–2017)
Next Article in Special Issue

The Tomales Bay Watershed is located approximately 64 km north of San Francisco, California. The watershed totals 560 km2 divided among three main tributaries: Lagunitas, Olema, and Walker Creeks [28]. This study was conducted in the 38 km2 Olema Creek Watershed (Figure 1). The U.S. National Park Service (NPS) administers 3762 hectares of mixed annual grassland and oak savanna/woodland ecological sites within the Olema Creek Watershed. The NPS manages 56% of this area (2107 hectares) as grazing lands leased to local cattle ranching operations. Climate in the area is Mediterranean with the majority (~95%) of precipitation falling as rainfall between October and April (wet season), and a pronounced dry season May through September [28]. The mainstem of Olema Creek is perennial with flows ranging from ~0.01 cubic meters per second during the dry season to over 70 cms during the wet season [29]. With a few exceptions, Olema Creek tributaries are predominantly intermittent, with streamflow during the wet season.

The U.S. National Park Service conducted a microbial water quality monitoring program within the Olema Creek watershed to quantify trends in fecal coliform concentrations during this stream corridor grazing BMP campaign (hydrologic year 1999 through 2017). During this period stream water grab samples were collected at five permanent sites within the grazing lands area (Figure 1; sites A-D on Olema Creek, site E on a grazed perennial tributary stream). Grab samples were also collected over this period on one non-grazed, perennial tributary to Olema Creek to serve as a stable, control (Figure 1; site F) time series for comparison to the potentially trending time series from the grazed lands receiving BMPs over the study period. The control sub-watershed was characterized by the same oak savanna/woodland vegetation, weather, hydrology, and background microbial sources found on the grazed areas of the Olema Creek Watershed. The control sub-watershed has not been grazed by livestock since the late 1960’s, with limited hiking access being the only anthropological use during this period. There were no land use changes in the control sub-watershed during the study period, making it a stable time series for comparison.
Sampling frequency during the summer low flow season ranged from quarterly (1999–2003) to approximately monthly (2004–2017), and from three (1999–2003) to eight (2004–2017) storm runoff samples during the winter rainfall season (see Figure 2 for total sample numbers across all sites for each year). Fecal coliform concentrations (Most Probable Number (MPN/100ml)) were enumerated using the SM 9221E multiple tube technique for all samples. Previous studies demonstrated that fecal coliform concentrations in the region are strongly associated with rainfall conditions prior to sample collection [14], so we calculated the antecedent 24-h cumulative precipitation (PPT) for each sample for use as a covariate in the analysis of fecal coliform data.

We used negative binomial regression analysis to determine if fecal coliform concentrations at sample sites in the grazed area decreased (relative to concentrations in the long-term non-grazed control tributary) during the stream corridor grazing BMP implementation period (1999–2017). The count nature of the fecal coliform (MPN/100ml) response variable, coupled with its over-dispersion motivated the use of the negative binomial specification. Covariates in the analysis included overall trend across all sites (years; 1999 through 2017), grazed site (Yes = sites A-E, No = site F), the interaction of overall trend (year) and grazed site (Yes/No), and antecedent 24-h cumulative precipitation (mm). The significance of the interaction term provides a specific test that any observed trend for grazed sites was different from the long-term non-grazed control tributary. Sample number per site per year was included as an exposure variable to account for variability in sampling intensity over the course of the study and standard error estimates were clustered on sample site to control for site-specific heterogeneity (Figure 2). Given the potential for our results to be influenced by repeated samples being taken at a given site over a 19-year period, we tested model robustness using a random effects negative binomial specification. Our results and conclusions are robust to this alternative specification. All statistical analyses were conducted in Stata/SE 15.0.

Over the 19-year grazing BMP implementation campaign, model predictions (Table 1 and Figure 4) indicate that a 1.28 log10 (95%) reduction in average fecal coliform concentration was realized at grazed sample sites, compared to the non-grazed control site. These results are consistent with other studies that have assessed stream corridor grazing BMPs, generally finding a 1–2 log10 (90%–99%) reduction in fecal indicator bacteria concentrations (e.g., [8,30]). Fencing to limit or exclude cattle access to stream corridors has been shown to be highly effective in improving water quality and riparian habitat [21,31]. In a recent comprehensive review of fecal indicator bacteria reductions reported in studies of stream corridor fencing, O’Callaghan et al. [18] found results ranging from 65.9% [32] to 83% [33]. Examining improved livestock crossings designed to limit direct contact of livestock with streams, Smolders et al. [22] reported over 100% reductions in fecal coliform concentrations compared to unimproved crossings. However, the authors concluded this practice alone would not be sufficient to safe-guard water quality. On Olema Creek and tributaries, hardened stream crossings were implemented in direct conjunction with stream corridor fencing. Reviewing the efficacy of non-fencing grazing BMPs designed to reduce the time free-ranging livestock spend in stream corridors (e.g., off-stream livestock water), Malan et al. [31] and George et al. [21] all concluded these practices are generally effective across diverse grazing lands—but with substantial variability among studies due to a variety of site specific conditions. Our results are congruent with other research on this topic globally, and the relatively high efficacy realized at Olema Creek can likely be attributed to the cumulative benefits of integrated implementation of multiple grazing BMPs (fencing, hardened crossing, and off-site drinking water) at a relatively large spatial scale [21].
An interesting aspect of our findings is that, while the downward trend observed across grazed sites was significant across the entire period (Figure 4), there was a notable reduction in fecal coliform concentrations with the completion of the 1999-2006 BMP phase (Figure 3). This suggests that some relatively substantial sources of cattle derived microbial pollution were prioritized and addressed early in the BMP campaign, resulting in disproportionately large return on investment ($125k), relative to BMPs implemented later in the project ($745k). Comparing the 1999–2006 mean (1906) to the 2007–2017 mean (291), it appears that the initial prioritization and implementation of BMPs was associated with a mean reduction of fecal coliform by 1615 cfu/100ml—an 85% mean reduction that persisted throughout the remainder of the study period. All six BMPs implemented between 1999 and 2006 were stream corridor fencing (3.8 km), with five of the six projects directly eliminating cattle access to approximately 90% of the mainstem of Olema Creek (Figure 1). Between 2007 and 2017, an additional 13.5 km of stream corridor fencing was implemented to exclude grazing from the remaining 2.1 km (~10%) of the mainstem and from 11.4 km of tributary stream corridor (~25% of total in grazed area). During this time period (2007–2017), off-stream drinking water and hardened crossings were also implemented. These subsequent practices were associated with continued—but relatively modest—reductions in microbial pollutants across grazed sample sites, compared to 1999 through 2006 (Figure 3). These results highlight the importance in prioritization of pollutant sources at the watershed scale to target BMP implementation for rapid and substantial water quality improvements and return on investment.

There is substantial concern about risks that livestock derived microbial pollutants can pose to public health in coastal watersheds. Tomales Bay is one of many areas globally where managers and policy-makers must make decisions and take action to protect public health while supporting socio-economically important activities such as sustainable agriculture. The scientific literature provides managers with a suite of livestock grazing BMPs generally known to be variably effective for protecting water quality in grazed watersheds. These practices are commonly employed in structured efforts at the management scale, with limited resources available for monitoring. Real world BMP implementation and associated monitoring campaigns—such as the one reported in this paper—often suffer from challenges including insufficient pre/post-implementation data and not having identical treatment and control watersheds. Thus, it is often difficult to demonstrate, beyond all reasonable doubt, that grazing BMP implementation strategies result in quantifiable water quality improvements. Despite this, policy-makers and managers must make decisions and take action to protect public health in working landscapes. Our results indicate that in a sustained watershed scale effort, specifically designed to protect public health from livestock grazing activities, managers in Olema Creek were successful in achieving substantial reductions in fecal coliform concentrations via BMP implementation. These results are in strong agreement with a growing body of research on this topic. Strategic, watershed scale grazing BMP implementation campaigns are an effective and important component of comprehensive source reduction policies and strategies to protect public health from waterborne microbial pollutants in grazed coastal systems. 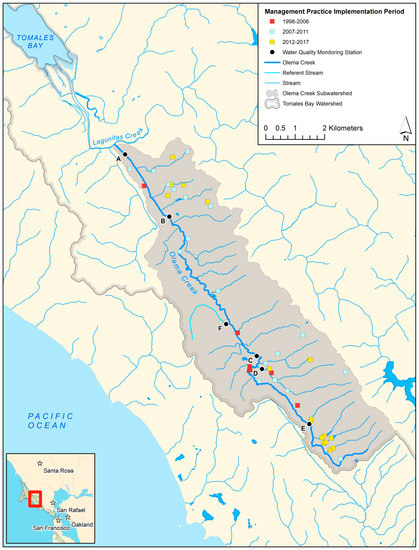 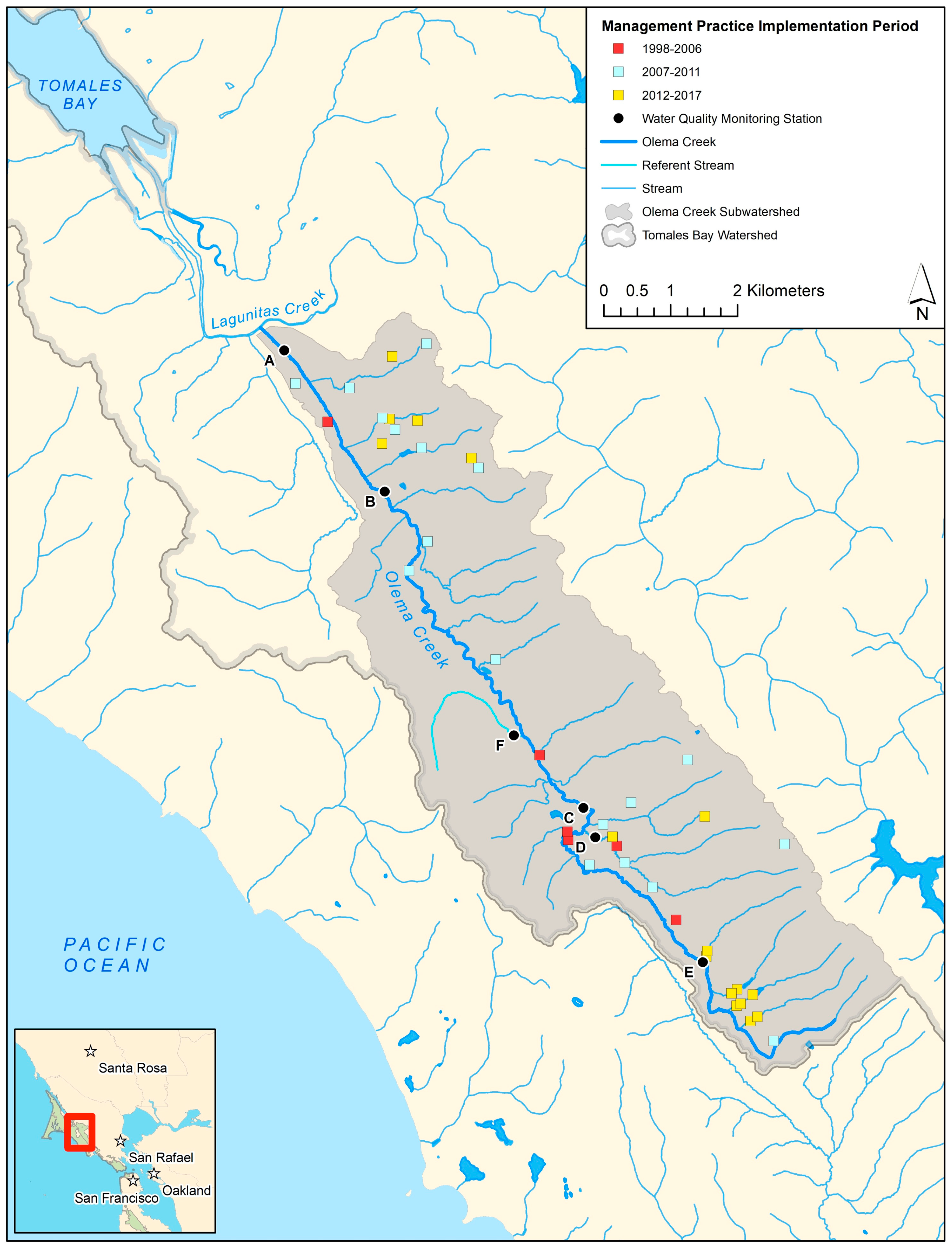 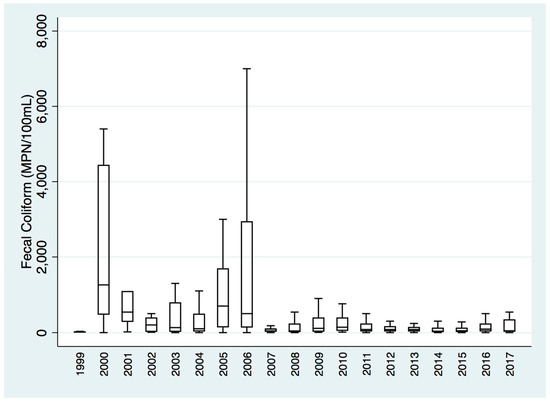 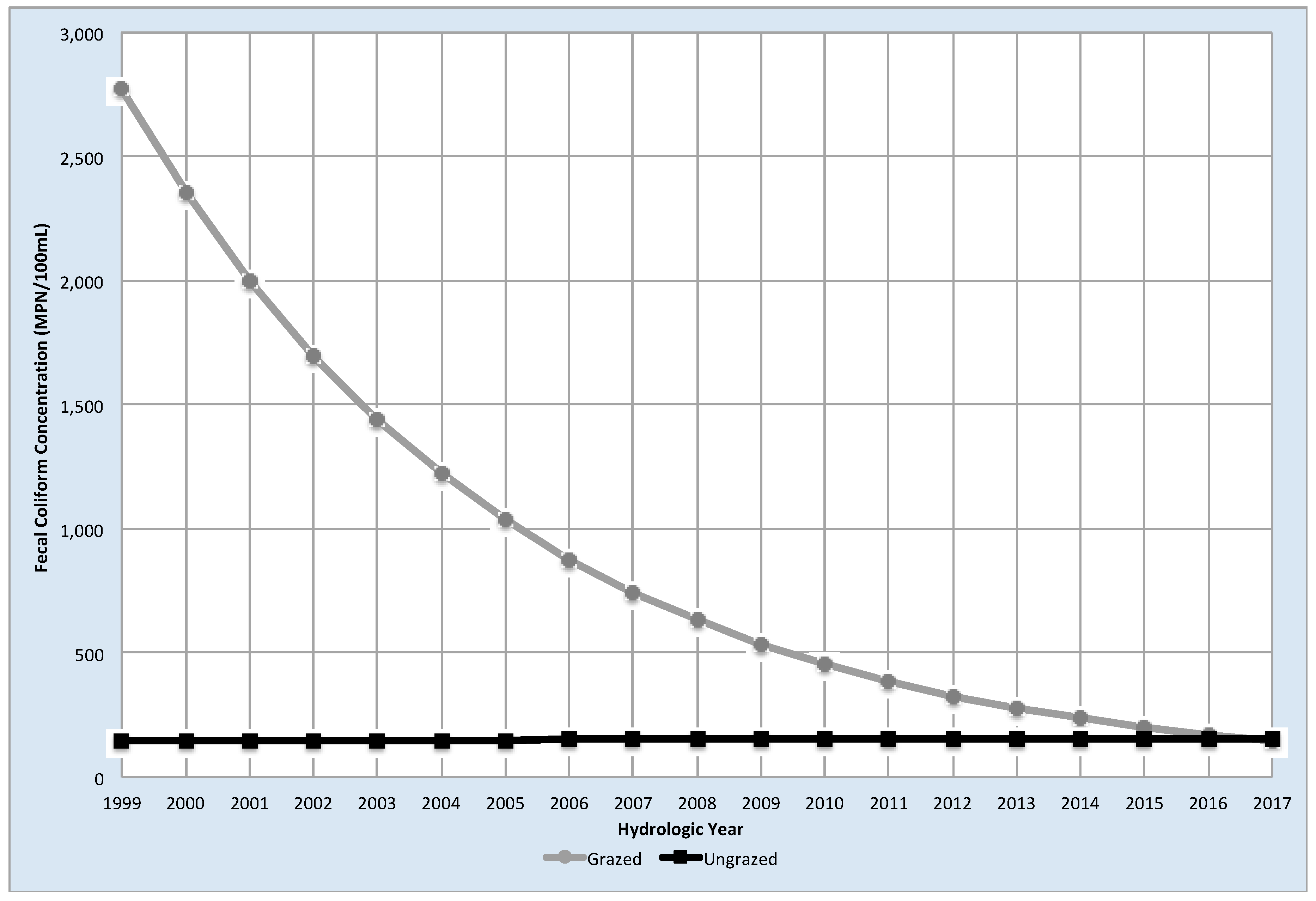