The scope of Tulsi (Ocimum sanctum) as an alternative crop and means of livelihood, particularly for the rural poor, has not been extensively explored. Tulsi is in much demand for its medicinal and aromatic properties, particularly in Ayurveda. With increased depredation of cereal crops by wildlife, increased pest incidence, and decreasing availability of water for agriculture, an attempt was made to explore alternative livelihoods through Tulsi cultivation and value chain development. Using cross-sectional survey data of beneficiary households, the study employed the ordinary least squares method to examine the relationship between total crop income and the income from Tulsi for 2016 and 2017. The findings suggest that the average household’s gross profit more than doubled within a span of two years. Total crop income of beneficiary farmers increased by 0.8 percent for every 1 percent increase in income from Tulsi. Most importantly, the intervention has shown a tremendous adoption rate. Initially, in 2013, 200 farmers cultivated Tulsi on 8.72 hectors of unirrigated and fallow land in the five beneficiary villages, but by 2017, towards the end of the intervention period, 400 farmers were cultivating the crop on 19.6 hectors of unirrigated, fallow land in 19 villages in Chamoli District. Tulsi farming and value chain development intervention not only provided marginal and smallholder farmers in these villages with a sustainable alternative additional livelihood option but also an opportunity where they were able to sustainably generate income from unirrigated, fallow land. View Full-Text
Keywords: Ocimum sanctum; alternative additional livelihood; crop depredation; out-scaling; Tulsi; value chain development Ocimum sanctum; alternative additional livelihood; crop depredation; out-scaling; Tulsi; value chain development
►▼ Show Figures 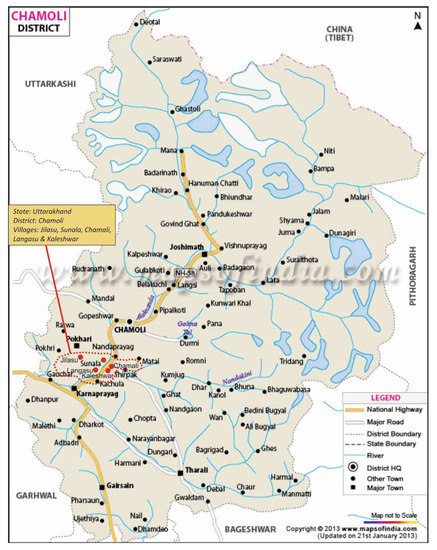