Effectiveness of Fungicide on Soybean Rust in the Southeastern United States: A Meta-Analysis

Soybean rust (SBR), caused by the fungus Phakopsora pachyrhizi Sydow, has been of concern to soybean (Glycine max Merrill) growers in the southern United States since its introduction in 2004. As this fungus develops, pustules become numerous on the underside of leaves, which then turn yellow and drop prematurely, resulting in fewer pods, and poorly developed seeds. Our objective was to evaluate the efficacy of fungicide use in controlling SBR by conducting a meta-analysis of 61 published and unpublished trials across the southern United States from 2004 to 2014. We analyzed fungicide efficacy based on factors such as specific classes of fungicide, active ingredients, number of fungicide applications, target growth stage upon initial application, level of disease pressure, and year of the study. Fungicides significantly increased yield and 100-seed weight and decreased the severity of SBR. The means of SBR severity, yield, and 100-seed weight in fungicide-treated plants were 9% (95% confidence interval: 2%, 21%), 128% (121%, 135%), and 121% (116%, 128%), respectively, of those calculated in the control plants. By using meta-analysis to analyze fungicide efficacy across multiple field trials, we were able to determine that one application of a strobilurin fungicide when plants were either beginning pod development (R3) or developing seeds (R5) was the most cost-effective approach to controlling SBR and increasing 100-seed weight. View Full-Text
Keywords: strobilurin; triazole; fungicide spray program; yield response; sustainable agriculture strobilurin; triazole; fungicide spray program; yield response; sustainable agriculture
►▼ Show Figures 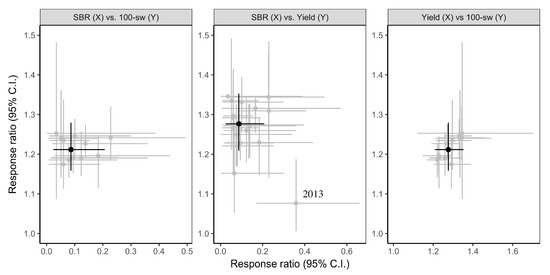