Phytoplankton as Key Mediators of the Biological Carbon Pump: Their Responses to a Changing Climate

Understanding the driving forces of absorption of anthropogenic CO2 by the oceans is critical for a sustainable ocean carbon cycle. Decadal sinking particle flux data collected at 1000 m, 2000 m, and 3500 m at the South East Asia Time Series Study (SEATS) Station (18° N, 116° E), which was located in the northern South China Sea (nSCS), show that the fluxes undergo strong seasonal and interannual variability. Changes in the flux data are correlated with the satellite-derived chlorophyll-a concentration, indicating that the mass fluxes of the sinking particles are largely controlled by the export production at or near the SEATS station. The cooling of seawater and the strengthening of wind in winter increase the nutrient inventories in the euphotic zone, thus also increasing export production in the nSCS. This study reveals that the intrusion of low-nutrient seawater from the West Philippine Sea into the nSCS significantly reduces the productivity, and hence the flux, of sinking particles. View Full-Text
Keywords: productivity; carbon cycle; SEATS; West Philippine Sea; export production; South China Sea productivity; carbon cycle; SEATS; West Philippine Sea; export production; South China Sea
►▼ Show Figures 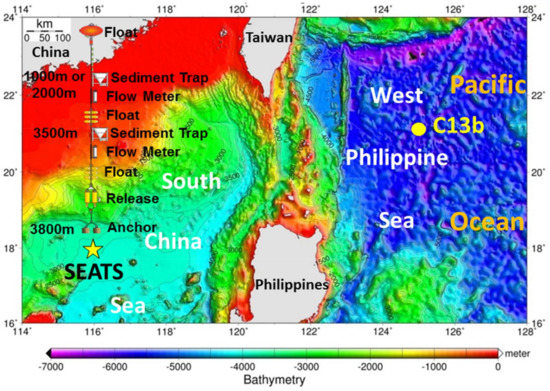