A Comparative Analysis on Food Security in Bangladesh, India and Myanmar
Next Article in Special Issue

Sustainable Investment in a Supply Chain in the Big Data Era: An Information Updating Approach
Previous Article in Special Issue

Clan in Transition: Societal Changes of Villages in China from the Perspective of Water Pollution

Formation of a Community of Practice in the Watershed Scale, with Integrated Local Environmental Knowledge

Rural communities around the world face formidable problems such as resource depletion, environmental degradation and economic decline. While the term ‘community’ is often used without clear definition or context, it can be viewed as a group of people emerging through social interaction. Through a series of collaborative action toward a shared goal, a community of practice can be formed. This paper proposes a hypothetical framework of integrated local environmental knowledge (ILEK), and applies it to analyze the processes of collaborative actions in the case of the Nishibetsu Watershed in Hokkaido, Japan. The case study identified several phases of actions, all initiated by a group of local residents on a grassroots and voluntary basis. These local resident-initiated collaborative actions had a particular confluence of elements to facilitate gradual strengthening of formal and informal institutions in the watershed scale beyond jurisdictional boundaries, making this a worthy case to study. The local residents used diverse types of knowledge, including livelihood-based technologies and skills of working as a group and with local governments, for establishing and strengthening various institutions for collaborative actions, with such knowledge being used in the manner of tools in a box of bricolage for community formation. View Full-Text
Keywords: community; knowledge; collaborative action; watershed; institution community; knowledge; collaborative action; watershed; institution
►▼ Show Figures 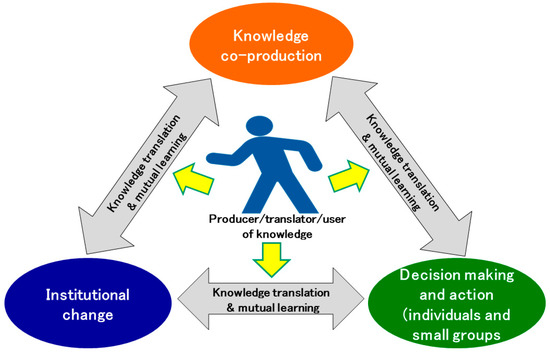 
Kitamura, Kenji; Nakagawa, Chigusa; Sato, Tetsu. 2018. "Formation of a Community of Practice in the Watershed Scale, with Integrated Local Environmental Knowledge." Sustainability 10, no. 2: 404.