Several biologically relevant phospholipids were assessed as potential carriers/additives for rapidly dissolving solid formulations of piroxicam (Biopharmaceutics Classification System Class II drug). On the basis of in vitro dissolution studies, dimyristoylphosphatidylglycerol (DMPG) was ranked as the first potent dissolution rate enhancer for the model drug. Subsequently, the solid dispersions of varying piroxicam/DMPG ratios were prepared and further investigated. Within the concentration range studied (6.4-16.7 wt %), the dissolution rate of piroxicam from the solid dispersions appeared to increase as a function of the carrier weight fraction, whereas the cumulative drug concentration was not significantly affected by piroxicam/DMPG ratio, presumably due to a unique phase behavior of the aqueous dispersions of this carrier phospholipid. Solid state analysis of DMPG-based formulations reveled that they are two-component systems, with a less thermodynamically stable form of piroxicam (Form II) being dispersed within the carrier. Finally, oral bioavailability of piroxicam from the DMPG-based formulations in rats was found to be superior to that of the control, as indicated by the bioavailability parameters, cmax and especially Tmax (53 µg/mL within 2 h vs. 39 µg/mL within 5.5 h, respectively). Hence, DMPG was regarded as the most promising carrier phospholipid for enhancing oral bioavailability of piroxicam and potentially other Class II drugs. View Full-Text
Keywords: poorly water soluble drugs; phospholipids; solid dispersions; dissolution; bioavailability poorly water soluble drugs; phospholipids; solid dispersions; dissolution; bioavailability
►▼ Show Figures 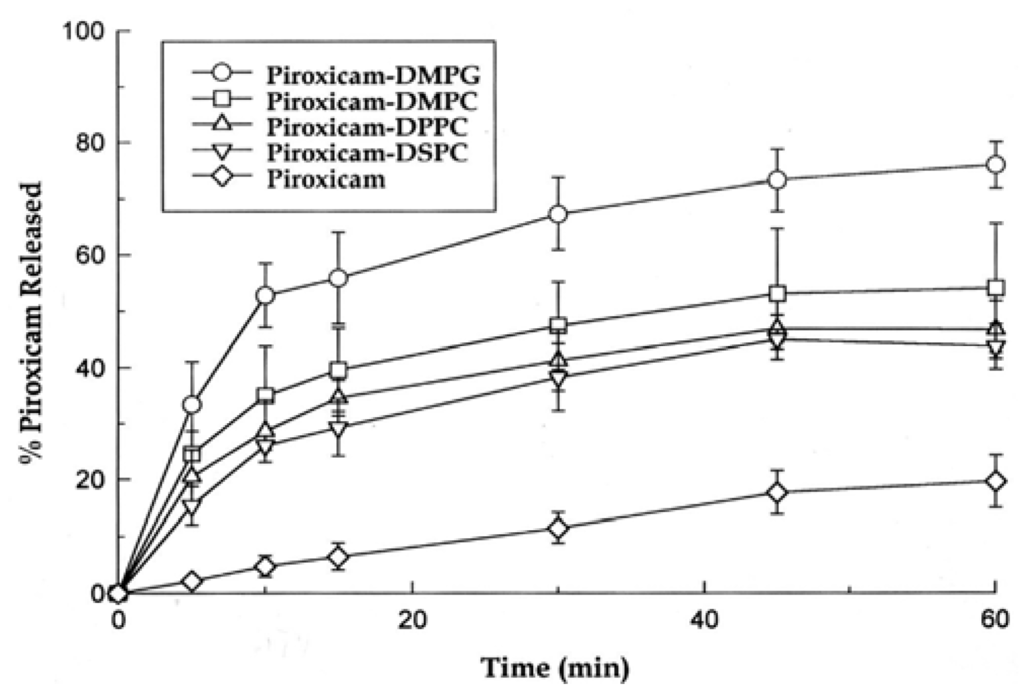