Update on Senecavirus Infection in Pigs

Senecavirus A (SVA) is a positive-sense single-stranded RNA virus that belongs to the Senecavirus genus within the Picornaviridae family. The virus has been silently circulating in pig herds of the USA since 1988. However, cases of senecavirus-associated vesicular disease were reported in Canada in 2007 and in the USA in 2012. Since late 2014 and early 2015, an increasing number of senecavirus outbreaks have been reported in pigs in different producing categories, with this virus being detected in Brazil, China, and Thailand. Considering the novel available data on senecavirus infection and disease, 2015 may be a divisor in the epidemiology of the virus. Among the aspects that reinforce this hypothesis are the geographical distribution of the virus, the affected pig-producing categories, clinical signs associated with the infection, and disease severity. This review presents the current knowledge regarding the senecavirus infection and disease, especially in the last two years. Senecavirus epidemiology, pathogenic potential, host immunological response, diagnosis, and prophylaxis and control measures are addressed. Perspectives are focused on the need for complete evolutionary, epidemiological and pathogenic data and the capability for an immediate diagnosis of senecavirus infection. The health risks inherent in the swine industry cannot be neglected. View Full-Text
Keywords: swine; picornavirus; Seneca Valley virus; emergent disease; vesicular disease; neonatal mortality swine; picornavirus; Seneca Valley virus; emergent disease; vesicular disease; neonatal mortality
►▼ Show Figures 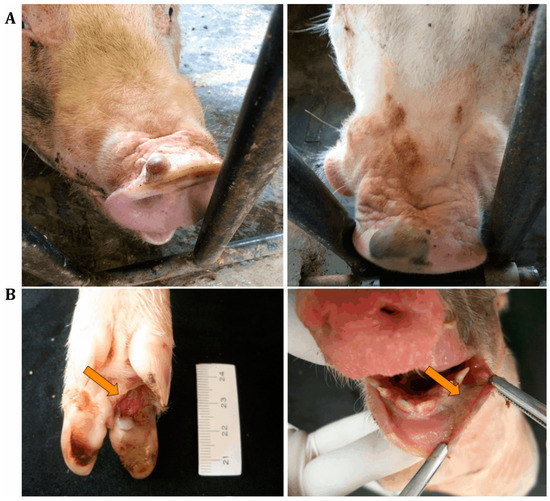