Of Viroids and Prions
Previous Article in Journal

Although viroids are the smallest and simplest plant pathogens known, the molecular mechanisms underlying their pathogenesis remain unclear. To unravel these mechanisms, a dual approach was implemented consisting of in silico identification of potential tomato silencing targets of pospiviroids, and the experimental validation of these targets through the sequencing of small RNAs and RNA ends extracted from tomatoes infected with a severe isolate of Citrus exocortis viroid (CEVd). The generated RNA ends were also used to monitor the differentially-expressed genes. These analyses showed that when CEVd symptoms are well established: (i) CEVd are degraded by at least three Dicer-like (DCL) proteins and possibly by RNA-induced silencing complex (RISC), (ii) five different mRNAs are partially degraded through post-transcriptional gene silencing (PTGS), including argonaute 2a, which is further degraded in phasiRNAs, (iii) Dicer-like 2b and 2d are both upregulated and degraded in phasiRNAs, and (iv) CEVd infection induced a significant shift in gene expression allowing to explain the usual symptoms of pospiviroids on tomato and to demonstrate the constant activation of host innate immunity and systemic acquired resistance (SAR) by these pathogenic RNAs. Finally, based on in silico analysis, potential immunity receptor candidates of viroid-derived RNAs are suggested. View Full-Text
Keywords: pospiviroid; innate immunity; degradome; transcriptome; RNA silencing; Dicer-like; argonaute; CEVd; systemic acquired resistance; SAR pospiviroid; innate immunity; degradome; transcriptome; RNA silencing; Dicer-like; argonaute; CEVd; systemic acquired resistance; SAR
►▼ Show Figures 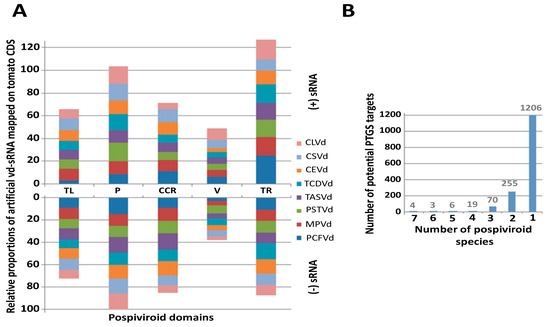