Black walnut, Juglans nigra, is native to eastern and midwestern U.S. (Figure 1), where it is both ecologically and economically important. Black walnut is a gap-phase species able to persist in the understory and quickly grow to fill canopy gaps. Due to its narrow range of suitable site conditions, black walnut can also serve as an indicator of moist, well-drained, protected sites rich in soil nutrients [1]. The nuts of black walnut are an important food for forest rodents and also are an economically important specialty crop for humans [1,2]. Some homeowners and landowners also harvest black walnut as a valuable nut crop for personal use or to sell for income. In some rural areas, black walnuts are important as part of the human diet and provide several medical benefits. The heavy, richly-grained wood of mature trees is prized as a timber commodity, and its growth form makes it a desirable nursery plant [2,3]. Although it is not native to western U.S., black walnut has been transplanted and is grown throughout much of the area [4,5]. Black walnut is now threatened by a new insect/fungal disease complex which has been documented in the native range of black walnut and has potential to cause tremendous tree decline and mortality.

The walnut twig beetle is native to western U.S., where it is found in several states, including Arizona, California, Colorado, Idaho, New Mexico, Oregon, Utah, and Washington (Figure 2) [8-11]. The primary range of P. juglandis originally included Arizona, New Mexico, and Chihuahua, Mexico and coincided with the range of Arizona walnut (Juglans major), which is native to the southwestern U.S. [2,8,15].

The association of P. juglandis with G. morbida is a new discovery and may be a new phenomenon [7,15,16]. Black walnuts are extremely susceptible to TCD, which has caused widespread mortality of black walnut in Colorado where this valuable resource has been eliminated from several municipalities [15]. This disease complex, however, is no longer restricted to western U.S., as it was recently discovered on black walnut in eastern Tennessee (Figure 1) [14].

The discovery of TCD on black walnut in its native range in eastern Tennessee in July 2010 represents the first documentation of this disease complex east of Colorado [14]. TCD has since been found in Virginia in June 2011 [17] and Pennsylvania in August 2011 [18]. The impact of TCD on black walnut in its native range is unclear; however, scientists speculate that, if left unmanaged, this disease could cause the extinction of this important native timber/nut/nursery crop/mast producer in eastern U.S. The potential impacts and spread of this disease complex on black walnut have been proposed and described by several authors [2,19]. This paper documents the initial assessment of distribution of TCD in Tennessee.

Once TCD was documented and confirmed in Tennessee (Knox Co.) during the summer of 2010, the Tennessee Department of Agriculture (TDA) collected twig samples from black walnut from 13 August to 27 September 2010 to determine the presence of the walnut twig beetle and the pathogen, as well as the incidence and spread of TCD, in this area. One twig sample was collected from each tree, and a sample consisted of ca. 10 twigs that averaged ca. 2 cm in diameter and ca. 28 cm in length. Main stem samples were not collected to avoid injury to non-infected/infested trees. Twig samples were collected from suspect trees in various counties from August to September by TDA personnel and placed in plastic bags. A suspect tree was identified based on several symptoms, including yellowing leaves, dieback, and epicormic shoots. Monitoring tools were not used to collect walnut twig beetles. Samples were provided to collaborators at the University of Tennessee for processing and examination for the presence of P. juglandis and G. morbida. Observations on tree mortality and tree health were also noted, where appropriate.

Once samples were retrieved from TDA personnel, samples were placed in an environmental chamber (ca. 12 °C) and processed, usually within 1–3 days, in the laboratory. Twigs were examined and dissected using a knife to shave away bark tissue gradually to determine the presence of walnut twig beetles and/or cankers. Beetles were identified based on morphological features (JFG and GJW), and vouchers were confirmed by Whitney Cranshaw (Colorado State Univ.) [8,9,15,20]. Other insects, especially bark beetles, were also noted. When cankers were found, a sample of the canker was plated and cultured on 1/10 potato dextrose broth solidified with 8 g/L bacto agar and incubated on a 12:12 light:dark cycle at 22 °C. Pathogens that grew on the media were examined visually and microscopically after 6–10 days, and G. morbida was positively identified (MTW). Based upon the Rules of Tennessee Department of Agriculture, TCD was confirmed on samples when both the walnut twig beetle and the fungal pathogen were documented [12].

2.2. Distribution Results and Regulatory Map for TCD in Tennessee

Eighty-six samples from 19 counties (Figure 3) were processed; all samples except two (Davidson Co.) were from eastern Tennessee, where TCD was initially confirmed. These 86 samples represented 82 different trees, as four trees were sampled twice. Walnut twig beetle and G. morbida were confirmed on black walnut in four counties (Anderson, Blount, Knox, and Union Co.). These four counties were quarantined by TDA in 2010, and 10 buffer counties were also regulated (Figure 3) [12]. In three (Anderson, Blount and Union Counties) of the four TCD-positive counties, G. morbida was cultured from two of the samples that did not contain walnut twig beetles. Also, G. morbida was not cultured from several samples that contained walnut twig beetles. Trees positive for TCD were not destroyed. These results emphasize the need for further efforts to define epidemiology of TCD in the native range of black walnut. Several sampled trees had already died; these trees had signs of walnut twig beetle and cankers, suggesting that they may have died from TCD. Other dead trees, however, had no signs of beetles or cankers and may have died from drought stress and other contributing factors.

The presence of TCD in Tennessee in 2010 represented the only known, documented incidence of this beetle/pathogen complex in the native range of black walnut in the eastern U.S. Thus, opportunities exist to expand research and outreach activities to better understand this disease and its causative agents. Additional surveys for this disease are planned for eastern and middle Tennessee and will include samples from walnuts in urban and forest settings to determine life cycle, population density, distribution, and impact on black walnut in the region. Numerous scolytid species are present in Tennessee, and their role in the epidemiology of TCD should be investigated [21]. Knowledge gained can be applied throughout the native range of black walnut to enable scientists to develop management strategies to limit the economic and environmental impact of this potentially devastating disease. For further information (Action Plan, Regulations, Quarantine Map, etc.) on TCD in Tennessee, visit the Tennessee Department of Agriculture's TCD informational site ( www.tn.gov/agriculture/regulatory/tcd.html) [22]. 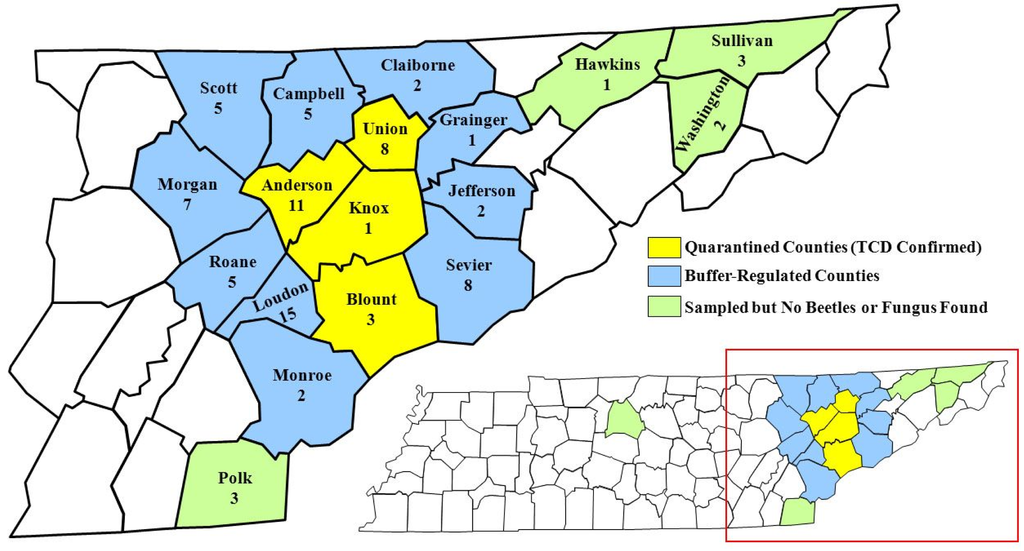 The information and advice provided by Whitney Cranshaw and Ned Tisserat (Colorado State University), who originally confirmed TCD in Tennessee, were greatly appreciated. We express appreciation to TDA personnel for providing samples and to Renee Follum, Lydia McClure, and Lisa Vito (University of Tennessee) for their assistance in processing samples.