Growth, Carbon Storage, and Optimal Rotation in Poplar Plantations: A Case Study on Clone and Planting Spacing Effects
Next Article in Special Issue

Holm oak (Quercus ilex) is one of the most widely distributed tree species in the Mediterranean basin. High mortality rates have been observed in holm oak populations in the southwest of the Iberian Peninsula as a result of oak decline syndrome. Selection and propagation of genotypes tolerant to this syndrome could aid the restoration of affected areas. In this article, we report micropropagation and conservation procedures based on axillary budding and somatic embryogenesis (SE) of holm oak plants, selected for their tolerance to Phytophthora cinnamomi—the main biotic factor responsible for oak decline. Forced shoots were obtained from potted plants of eight different genotypes, and used as stock material to establish in vitro shoot proliferation cultures. Reliable shoot proliferation was obtained in seven out the eight genotypes established in vitro, whereas multiplication rates were genotype-dependent. The highest rooting rates were obtained by culturing shoots for 24 h or 48 h on rooting induction medium containing 25 mg L−1 indole-3-butyric acid, followed by transfer to medium supplemented with 20 µM silver thiosulphate. Axillary shoot cultures can be successful conserved by cold storage for 12 months at 4 °C under dim lighting. Shoot tips, excised from axillary shoot cultures established from tolerant plants, were used as initial explants to induce SE. Somatic embryos and/or nodular embryogenic structures were obtained on induction medium with or without indole-acetic acid 4 mg L−1, in two out the three genotypes evaluated, and induction rates ranged between 2 and 4%. Plantlet recovery was 45% after two months cold stratification of somatic embryos and eight weeks of culture on germination medium. Vegetative propagation of P. cinnamomi-tolerant Q. ilex trees is a valuable milestone towards the restoration of disease-affected areas. View Full-Text
Keywords: axillary shoot proliferation; clonal propagation; micropropagation; Phytophthora cinnamomi; Quercus ilex; silver thiosulphate; somatic embryogenesis; disease-tolerant plants axillary shoot proliferation; clonal propagation; micropropagation; Phytophthora cinnamomi; Quercus ilex; silver thiosulphate; somatic embryogenesis; disease-tolerant plants
►▼ Show Figures 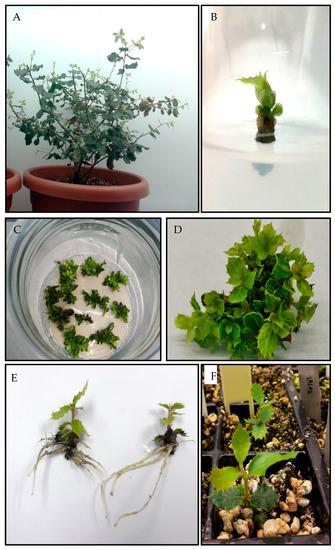