Determining the Distribution and Interaction of Soil Organic Carbon, Nitrogen, pH and Texture in Soil Profiles: A Case Study in the Lancangjiang River Basin, Southwest China
Next Article in Special Issue

Coastal Pine-Oak Glacial Refugia in the Mediterranean Basin: A Biogeographic Approach Based on Charcoal Analysis and Spatial Modelling
Previous Article in Journal

The distribution of tree species has traditionally been analyzed based on tree diameter (DBH) as a continuous variable. However, this approach does not usually provide information on how species are distributed across the area of interest. In this study, an inverse approach was applied to investigate tree distribution patterns in two Dinaric old-growth forest stands composed primarily of European beech, silver fir, and Norway spruce. Specifically, the variance-to-mean relationship of tree counts based on 80 plots (40 in each old-growth stand) were evaluated by using a dispersion index. Understory trees exhibited clumped and random patterns, whereas canopy trees were mostly distributed in a random manner. A regular pattern was only determined for beech and all trees in the canopy layer (two cases out of ten). The observed discrete variables were further compared with three theoretical distributions. It was found that a Poisson, binomial, and negative binomial model best fitted the observed count data, which, based on the dispersion index, exhibited a random, regular, and clumped pattern, respectively. The frequency of plots with low species presence and complete absence of species was also revealed. Consequently, the analysis and modeling of tree counts can be of practical use for species conservation purposes. View Full-Text
Keywords: old-growth; quadrat counts; tree diameters; tree distribution patterns; species count data; mixed forests old-growth; quadrat counts; tree diameters; tree distribution patterns; species count data; mixed forests
►▼ Show Figures 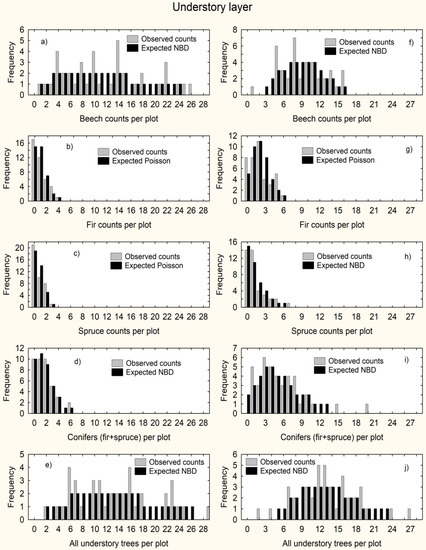