Specimens of aluminum-based composites reinforced by silicon carbide nanoparticles (Al/SiCnp) produced by powder metallurgy (PM) were anodized under voltage control in tartaric-sulfuric acid (TSA). In this work, the influence of the amount of SiCnp on the film growth during anodizing was investigated. The current density versus time response and the morphology of the porous alumina film formed at the composite surface are compared to those concerning a commercial aluminum alloy (AA1050) anodized under the same conditions. The processing method of the aluminum alloys influences the efficiency of the anodizing process, leading to a lower thicknesses for the unreinforced Al-PM alloy regarding the AA1050. The current density versus time response is strongly dependent on the amount of SiCnp. The current peaks and the steady-state current density recorded at each voltage step increases with the SiCnp volume fraction due to the oxidation of the SiCnp. The formation mechanism of the anodic film on Al/SiCnp composites is different from that occurring in AA1050, partly due the heterogeneous distribution of the reinforcement particles in the metallic matrix, but also to the entrapment of SiCnp in the anodic film. View Full-Text
Keywords: aluminum matrix composite; powder metallurgy; anodizing; oxide film; nanosized reinforcements aluminum matrix composite; powder metallurgy; anodizing; oxide film; nanosized reinforcements
►▼ Show Figures 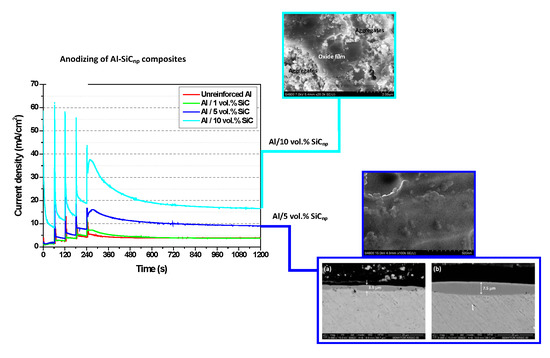