Since the transfer process of graphene from a dedicated growth substrate to another substrate is prone to induce defects and contamination and can increase costs, there is a large interest in methods for growing graphene directly on silicon wafers. Here, we demonstrate the direct CVD growth of graphene on a SiO2 layer on a silicon wafer by employing a Pt thin film as catalyst. We pattern the platinum film, after which a CVD graphene layer is grown at the interface between the SiO2 and the Pt. After removing the Pt, Raman spectroscopy demonstrates the local growth of monolayer graphene on SiO2. By tuning the CVD process, we were able to fully cover 4-inch oxidized silicon wafers with transfer-free monolayer graphene, a result that is not easily obtained using other methods. By adding Ta structures, local graphene growth on SiO2 is selectively blocked, allowing the controlled graphene growth on areas selected by mask design. View Full-Text
Keywords: graphene synthesis; CVD; nanofabrication; thin films; silicon technology graphene synthesis; CVD; nanofabrication; thin films; silicon technology
►▼ Show Figures 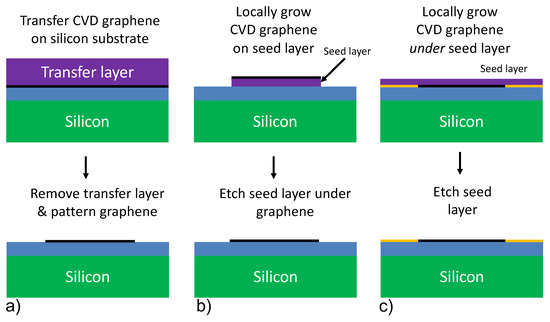