Asymmetrical shear rolling with velocity asymmetry and geometry asymmetry is beneficial to enlarge deformation and refine grain size at the center of the thick plate compared to conventional symmetrical rolling. Dynamic recrystallization (DRX) plays a vital role in grain refinement during hot deformation. Finite element models (FEM) coupled with microstructure evolution models and cellular automata models (CA) are established to study the microstructure evolution of plate during asymmetrical shear rolling. The results show that a larger DRX fraction and a smaller average grain size can be obtained at the lower layer of the plate. The DRX fraction at the lower part increases with the ascending speed ratio, while that at upper part decreases. With the increase of the offset distance, the DRX fraction slightly decreases for the whole thickness of the plate. The differences in the DRX fraction and average grain size between the upper and lower surfaces increase with the ascending speed ratio; however, it varies little with the change of the speed ratio. Experiments are conducted and the CA models have a higher accuracy than FEM models as the grain morphology, DRX nuclei, and grain growth are taken into consideration in CA models, which are more similar to the actual DRX process during hot deformation. View Full-Text
Keywords: asymmetrical shear rolling; microstructure evolution models; cellular automata; DRX behavior; grain refinement asymmetrical shear rolling; microstructure evolution models; cellular automata; DRX behavior; grain refinement
►▼ Show Figures 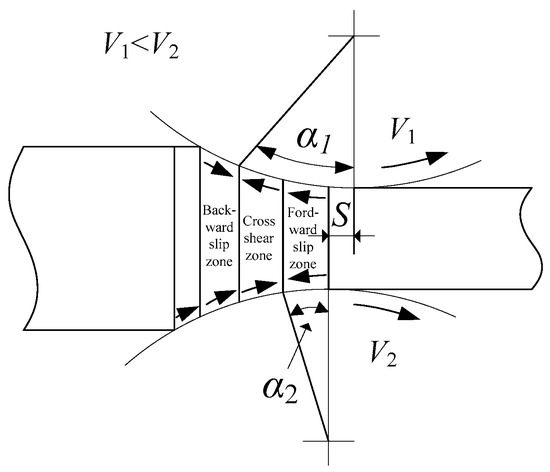