This study investigates the mechanical behavior of steel fiber-reinforced concrete (SFRC) beams internally reinforced with steel bars and externally bonded with carbon fiber-reinforced polymer (CFRP) sheets fixed by adhesive and hybrid jointing techniques. In particular, attention is paid to the load resistance and failure modes of composite beams. The steel fibers were used to avoiding the rip-off failure of the concrete cover. The CFRP sheets were fixed to the concrete surface by epoxy adhesive as well as combined with various configurations of small-diameter steel pins for mechanical fastening to form a hybrid connection. Such hybrid jointing techniques were found to be particularly advantageous in avoiding brittle debonding failure, by promoting progressive failure within the hybrid joints. The use of CFRP sheets was also effective in suppressing the localization of the discrete cracks. The development of the crack pattern was monitored using the digital image correlation method. As revealed from the image analyses, with an appropriate layout of the steel pins, brittle failure of the concrete-carbon fiber interface could be effectively prevented. Inverse analysis of the moment-curvature diagrams was conducted, and it was found that a simplified tension-stiffening model with a constant residual stress level at 90% of the strength of the SFRC is adequate for numerically simulating the deformation behavior of beams up to the debonding of the CFRP sheets. View Full-Text
Keywords: adhesive-mechanical connection; debonding failure; external CFRP sheets; mechanical testing; steel fibers reinforced concrete adhesive-mechanical connection; debonding failure; external CFRP sheets; mechanical testing; steel fibers reinforced concrete
►▼ Show Figures 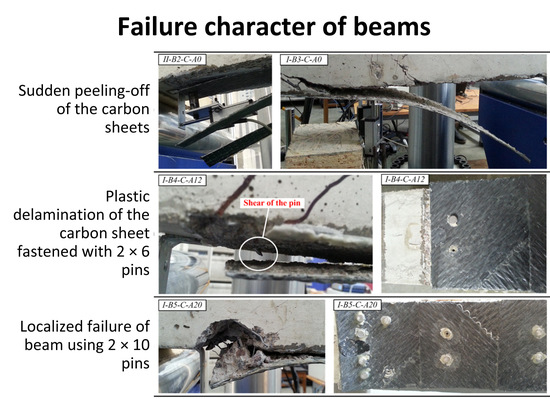