Modular systems have been mostly researched in relatively low-rise structures but, lately, their applications to mid- to high-rise structures began to be reviewed, and research interest in new modularization subjects has increased. The application of modular systems to mid- to high-rise structures requires the structural stability of the frame and connections that consist of units, and the evaluation of the stiffness of structures that are combined in units. However, the combination of general units causes loss of the cross-section of columns or beams, resulting in low seismic performance and hindering installation works in the field. In addition, the evaluation of a frame considering such a cross-sectional loss is not easy. Therefore, it is necessary to develop a joint that is stable and easy to install. In the study, a rigidly connected modular system was proposed as a moment-resisting frame for a unit modular system, and their joints were developed and their performances were compared. The proposed system changed the ceiling beam into a bracket type to fasten bolts. It can be merged with other seismic force-resisting systems. To verify the seismic performance of the proposed system, a cyclic loading test was conducted, and the rigidly connected joint performance and integrated behavior at the joint of modular units were investigated. From the experimental results, the maximum resisting force of the proposed connection exceeded the theoretical parameters, indicating that a rigid joint structural performance could be secured. View Full-Text
Keywords: modular system; cyclic loading test; seismic performance; column-beam connection; rigidly-connected joint; ceiling bracket modular system; cyclic loading test; seismic performance; column-beam connection; rigidly-connected joint; ceiling bracket
►▼ Show Figures 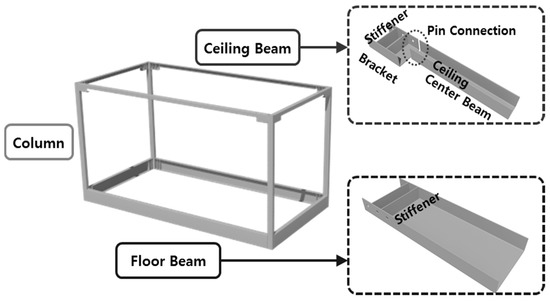 
Lee, Seungjae; Park, Jaeseong; Kwak, Euishin; Shon, Sudeok; Kang, Changhoon; Choi, Hosoon. 2017. "Verification of the Seismic Performance of a Rigidly Connected Modular System Depending on the Shape and Size of the Ceiling Bracket." Materials 10, no. 3: 263.