This paper presents a new high-efficient three-phase brushless wound rotor synchronous machine (BL-WRSM) based on a sub-harmonic field excitation technique. In the proposed machine topology, the stator is equipped with two different three-phase windings: (1) main armature winding, and (2) additional armature winding. The main armature winding is based on a 4-pole winding configuration, whereas the additional armature winding is based on a 2-pole winding configuration. Both windings are supplied current from two different inverters, i.e., inverter-1, inverter-2, and simultaneously. Inverter-1 provides the regular input current to the main armature winding, whereas inverter-2 provides a three-phase current of low magnitude to the 2-pole additional armature winding. This generates an additional sub-harmonic component of MMF in the airgap beside the fundamental MMF. On the other side, the rotor is equipped with (1) harmonic, and (2) field windings. These windings are electrically coupled via a rectifier. The fundamental component of MMF produces the main rotating magnetic field, whereas the sub-harmonic MMF gets induced in the harmonic winding to produce harmonic current. This current is rectified to give DC to the rotor field winding to attain brushless operation. To authenticate the operation and analyze its performance, the proposed BL-WRSM topology is supported using 2-D finite element analysis (FEA) in JMAG-Designer. Later on, the performance of the proposed brushless topology is compared with the customary BL-WRSM topology to verify its high efficiency, high output torque, low torque ripple, and low unbalanced radial force on the rotor. View Full-Text
Keywords: sub-harmonic field excitation; brushless operation; synchronous motor sub-harmonic field excitation; brushless operation; synchronous motor
►▼ Show Figures 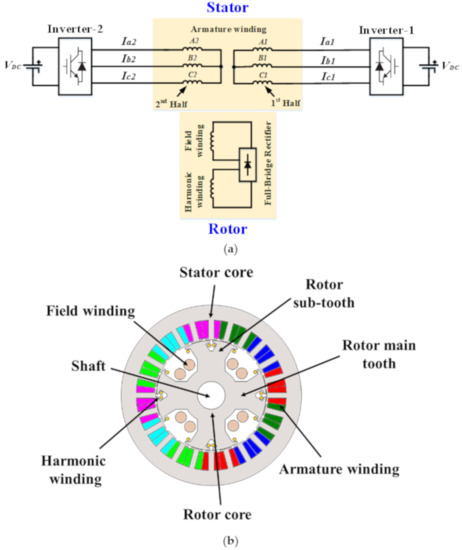