This research qualitatively reviews literature regarding energy system modeling in Japan specific to the future hydrogen economy, leveraging quantitative model outcomes to establish the potential future deployment of hydrogen in Japan. The analysis focuses on the four key sectors of storage, supplementing the gas grid, power generation, and transportation, detailing the potential range of hydrogen technologies which are expected to penetrate Japanese energy markets up to 2050 and beyond. Alongside key model outcomes, the appropriate policy settings, governance and market mechanisms are described which underpin the potential hydrogen economy future for Japan. We find that transportation, gas grid supplementation, and storage end-uses may emerge in significant quantities due to policies which encourage ambitious implementation targets, investment in technologies and research and development, and the emergence of a future carbon pricing regime. On the other hand, for Japan which will initially be dependent on imported hydrogen, the cost of imports appears critical to the emergence of broad hydrogen usage, particularly in the power generation sector. Further, the consideration of demographics in Japan, recognizing the aging, shrinking population and peoples’ energy use preferences will likely be instrumental in realizing a smooth transition toward a hydrogen economy. View Full-Text
Keywords: hydrogen economy; fuel cell; sustainability; Japan; energy model hydrogen economy; fuel cell; sustainability; Japan; energy model
►▼ Show Figures 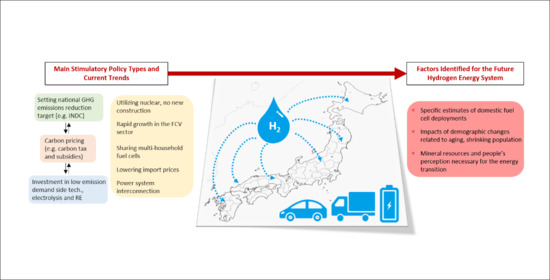