Impact of Drilling Costs on the US Gas Industry: Prospects for Automation

Recent low gas prices have greatly increased pressure on drilling companies to reduce costs and increase efficiency. Field trials have shown that implementing automation can dramatically reduce drilling costs by reducing the time required to drill wells. This study uses the DYNamic upstreAm gAs MOdel (DYNAAMO), a new techno-economic, bottom-up model of natural gas supply, to quantitatively assess the economic impact of lower drilling costs on the US upstream gas industry. A sensitivity analysis of three key economic indicators is presented, with results quoted for the most common field types currently producing, including unconventional and offshore gas. While all operating environments show increased profitability from drilling automation, it is found that conventional onshore reserves can benefit to the greatest extent. For large gas fields, a 50% reduction in drilling costs is found to reduce initial project breakevens by up to 17 million USD per billion cubic metres (MUSD/BCM) and mid-plateau breakevens by up to 8 MUSD/BCM. In this same scenario, additional volumes of around 160 BCM of unconventional gas are shown to become commercial due to both the lower costs of additional production wells in mature fields and the viability of developing new resources held in smaller fields. The capital efficiency of onshore projects increases by 50%–100%, with initial project net present value (NPV) gains of up to 32%. View Full-Text
Keywords: energy systems modelling; drilling; natural gas; upstream gas energy systems modelling; drilling; natural gas; upstream gas
►▼ Show Figures 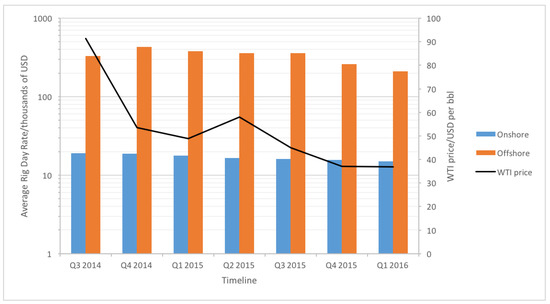