The Impact of Relative Poverty on Norwegian Adolescents’ Subjective Health: A Causal Analysis with Propensity Score Matching
Next Article in Special Issue

Effect of Temperature on Growth of Vibrio paraphemolyticus and Vibrio vulnificus in Flounder, Salmon Sashimi and Oyster Meat

The magnitude of regional malaria risk is dependent primarily on the dynamics and distribution of the vector species, which are determined mainly by climate conditions. A coupled model with ecophysiological and climatological factors was developed to estimate the spatiotemporal distribution of the five species of dominant malaria vectors in monsoon Asia. Here, we examined how the potential distribution obtained from the model could explain trends in malaria incidence observed in India, which has the highest number of confirmed cases of malaria in Asia. Most notably, there was a significant positive correlation between annual malaria incidences and the maximum generation number of vectors for each state (p < 0.001). Malaria incidence tended to increase exponentially as vector generation number increased. In addition, the interannual variation in observed regional malaria incidences was synchronized with that of the potential number of vector generations. The observed seasonal peak of malaria incidences corresponded closely to the simulated appearance period of vector species, except for intensively irrigated areas that experience anthropogenic impacts on hydrologic conditions. Simulated vector distributions effectively expressed spatial and temporal prevalence of malaria in India. This novel approach to modeling based on vector ecology is an effective method for assessing malaria risk. View Full-Text
Keywords: Anopheles; malaria incidence; coupled model; vector ecology; ecophysiology; climate factors Anopheles; malaria incidence; coupled model; vector ecology; ecophysiology; climate factors
►▼ Show Figures 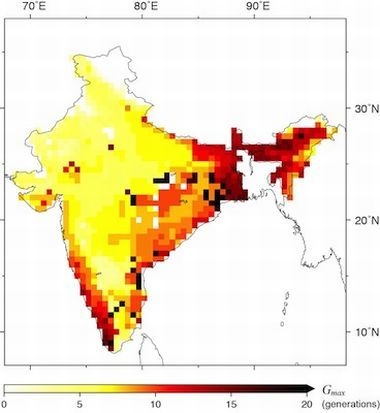