A German Model Project for Workplace Health Promotion—Flow of Communication, Information, and Reasons for Non-Participation in the Offered Measures
Previous Article in Journal

Neighborhood Disadvantage and Poor Health: The Consequences of Race, Gender, and Age among Young Adults

The Universal Thermal Climate Index (UTCI) is believed to be a very powerful tool for providing information on human thermal perception in the domain of public health, but the solar radiation as an input variable is difficult to access. Thus, this study aimed to explore the optimal strategy on estimation of solar radiation to increase the accuracy in UTCI calculation, and to identify the spatial and temporal variation in UTCI over China. With daily meteorological data collected in 35 tourism cities in China from 1961 to 2020, two sunshine-based Angstrom and Ogelman models, and two temperature-based Bristow and Hargreaves models, together with neural network and support vector machine-learning methods, were tested against radiation measurements. The results indicated that temperature-based models performed the worst with the lowest NSE and highest RMSE. The machine-learning methods performed better in calibration, but the predictive ability decreased significantly in validation due to big data requirements. In contrast, the sunshine-based Angstrom model performed best with high NSE (Nash–Sutcliffe Efficiency) of 0.84 and low RMSE (Root Mean Square Error) of 35.4 J/m2 s in validation, which resulted in a small RMSE of about 1.2 °C in UTCI calculation. Thus, Angstrom model was selected as the optimal strategy on radiation estimation for UTCI calculation over China. The spatial distribution of UTCI showed that days under no thermal stress were high in tourism cities in central China within a range from 135 to 225 days, while the largest values occurred in Kunming and Lijiang in southwest China. In addition, days under no thermal stress during a year have decreased in most tourism cities of China, which could be attributed to the asymmetric changes in significant decrease in frost days and slightly increase in hot days. However, days under no thermal stress in summer time have indeed decreased, accompanying with increasing days under strong stress, especially in the developed regions such as Yangze River Delta and Zhujiang River Delta. Based on the study, we conclude that UTCI can successfully depict the overall spatial distribution and temporal change of the thermal environments in the tourism cities over China, and can be recommend as an efficient index in the operational services for assessing and predicting thermal perception for public health. However, extreme cold and heat stress in the tourism cities of China were not revealed by UTCI due to mismatch of the daily UTCI with category at hourly scale, which makes it an urgent task to redefine category at daily scale in the next research work. View Full-Text
Keywords: UTCI calculation; radiation estimation; thermal comfort; public health UTCI calculation; radiation estimation; thermal comfort; public health
►▼ Show Figures 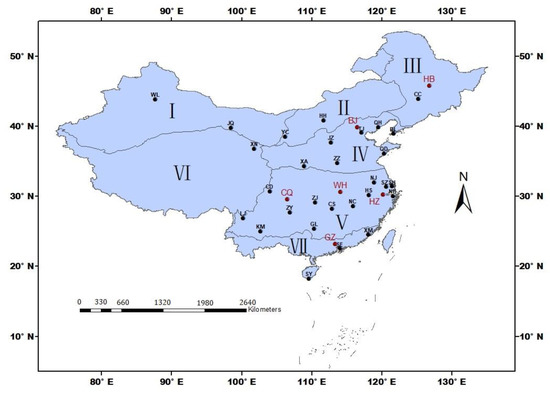