Revisiting the Immigrant Epidemiological Paradox: Findings from the American Panel of Life 2019
Previous Article in Journal

Work Resumption after a Fixed-Term Disability Pension: Changes over Time during a Period of Decreasing Incidence of Disability Retirement 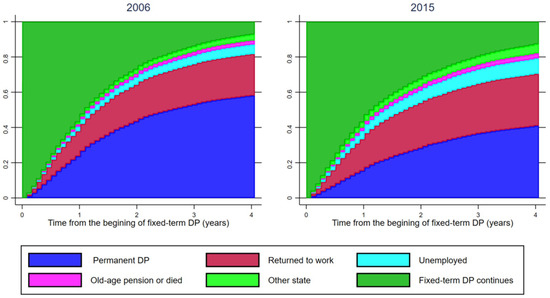 
Laaksonen M. Work Resumption after a Fixed-Term Disability Pension: Changes over Time during a Period of Decreasing Incidence of Disability Retirement. International Journal of Environmental Research and Public Health. 2021; 18(9):4618. https://doi.org/10.3390/ijerph18094618


Laaksonen, Mikko. 2021. "Work Resumption after a Fixed-Term Disability Pension: Changes over Time during a Period of Decreasing Incidence of Disability Retirement" International Journal of Environmental Research and Public Health 18, no. 9: 4618. https://doi.org/10.3390/ijerph18094618