Biopsychosocial Factors during the Perinatal Period: Risks, Preventative Factors, and Implications for Healthcare Professionals
Next Article in Special Issue

The Critical Role of Coping Strategies in Moderating Loneliness and Quality of Life: Parallel and Unique Processes among Transgender and Heterosexual Cisgender People in Pakistan
Previous Article in Journal

Acceptance and Commitment Therapy for Children with Special Health Care Needs and Their Parents: A Systematic Review and Meta-Analysis

Context: Acceptance and Commitment Therapy (ACT) is an emerging treatment for improving psychological well-being. Objective: To summarize research evaluating the effects of ACT on psychological well-being in children with special health care needs (SHCN) and their parents. Data Sources: An electronic literature search was conducted in PubMed, Web of Science, Ovid/EMBASE and PsycINFO (January 2000–April 2021). Study Selection: Included were studies that assessed ACT in children with SHCN (ages 0–17y) and/or parents of children with SHCN and had a comparator group. Data Extraction: Descriptive data were synthesized and presented in a tabular format, and data on relevant outcomes (e.g., depressive symptoms, stress, avoidance and fusion) were used in the meta-analyses to explore the effectiveness of ACT (administered independently with no other psychological therapy) compared to no treatment. Results: Ten studies were identified (child (7) and parent (3)). In children with SHCN, ACT was more effective than no treatment at helping depressive symptoms (standardized mean difference [SMD] = −4.27, 95% CI: −5.20, −3.34; p < 0.001) and avoidance and fusion (SMD = −1.64, 95% CI: −3.24, −0.03; p = 0.05), but not stress. In parents of children with SHCN, ACT may help psychological inflexibility (SMD = −0.77, 95% CI: −1.07, −0.47; p < 0.01). Limitations: There was considerable statistical heterogeneity in three of the six meta-analyses. Conclusions: There is some evidence that ACT may help with depressive symptoms in children with SHCN and psychological inflexibility in their parents. Research on the efficacy of ACT for a variety of children with SHCN and their parents is especially limited, and future research is needed. View Full-Text
Keywords: acceptance and commitment therapy; children with special health care needs acceptance and commitment therapy; children with special health care needs
►▼ Show Figures 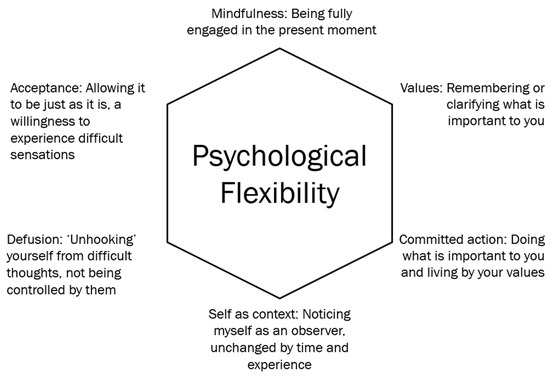