Ranking Preventive Interventions from Different Policy Domains: What Are the Most Cost-Effective Ways to Improve Public Health?
Previous Article in Journal

Perceptions of the Use of Alcohol and Drugs after Sudden Bereavement by Unnatural Causes: Analysis of Online Qualitative Data

Population Attributable Fraction of Early Age of Onset of Alcohol Use in Alcohol Abuse and Dependence: A 3-Year Follow-Up Study in University Students

Background: we aimed to determine the risk factors and associated population attributable fractions (PAFs) for the age of onset of alcohol use and also to identify protective factors. Methods: we analyzed follow-up data collected between autumn 2011 and spring 2016 (n = 5170) from the first two cohorts (2011, 2012) of the Spit for ScienceTM project. The dependent variables were alcohol abuse and dependence, and the independent variables were age of drinking onset, residence, ethnicity, religiosity, sexual orientation and work status. We determined the odds ratios (OR) using multilevel logistic regression for repeated measures in SPSSv.20. Results: the early onset of alcohol use was associated with an increased risk of alcohol abuse and dependence among females (OR = 14.98; OR = 11.83) and males (OR = 7.41; OR = 6.24). The PAFs for the early onset of alcohol use in alcohol abuse and dependence were respectively 80.9% and 71.7% in females and 71.0% and 63.5% in males. Among females, being white (OR = 1.58; OR = 1.51), living off-campus (OR = 1.73; OR = 2.76) and working full-time (OR = 1.69; OR = 1.78) were also risk factors. Strong religious beliefs were found to protect males from alcohol abuse (OR = 0.58), while same-gender sexual orientation increased the risk among females (OR = 2.09). Conclusion: delaying the age of onset by one year would reduce alcohol abuse among young adults. View Full-Text
Keywords: alcohol drinking in college; age of onset; risk factors; cohort alcohol drinking in college; age of onset; risk factors; cohort
►▼ Show Figures 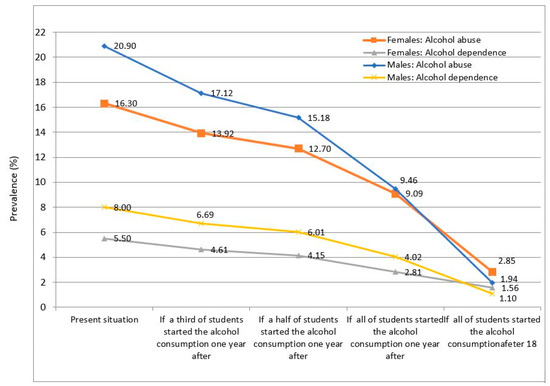