Content and Delivery of Physical Therapy in Multiple Sclerosis across Europe: A Survey
Next Article in Special Issue

Spatial Distribution of HIV Prevalence among Young People in Mozambique

Mozambique has a high burden of HIV and is currently ranked sixth worldwide for adult prevalence. In Mozambique, HIV prevalence is not uniformly distributed geographically and throughout the population. We investigated the spatial distribution of HIV infection among adolescents and young people in Mozambique using the 2009 AIDS Indicator Survey (AIS). Generalized geoadditive modeling, combining kriging and additive modeling, was used to study the geographical variability of HIV risk among young people. The nonlinear spatial effect was assessed through radial basis splines. The estimation process was done using two-stage iterative penalized quasi-likelihood within the framework of a mixed-effects model. Our estimation procedure is an extension of the approach by Vandendijck et al., estimating the range (spatial decay) parameter in a binary context. The results revealed the presence of spatial patterns of HIV infection. After controlling for important covariates, the results showed a greater burden of HIV/AIDS in the central and northern regions of the country. Several socio-demographic, biological, and behavioral factors were found to be significantly associated with HIV infection among young people. The findings are important, as they can help health officials and policy makers to design targeted interventions for responding to the HIV epidemic. View Full-Text
Keywords: HIV/AIDS; generalized geoadditive model; kriging mixed model; Mozambique HIV/AIDS; generalized geoadditive model; kriging mixed model; Mozambique
►▼ Show Figures 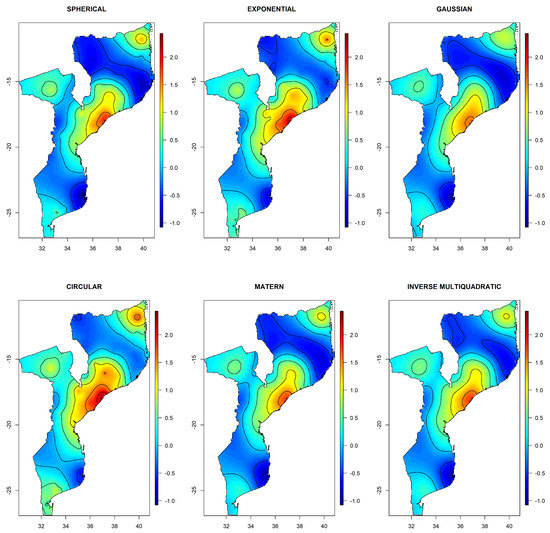