Quinolone (QN) antibiotics are widely used, which lead to their accumulation in soil and toxic effects on ryegrass in pasture. In this study, we employed ryegrass as the research object and selected the total scores of 29 QN molecules docked with two resistant enzyme structures, superoxide dismutase (SOD, PDB ID: 1B06) and proline (Pro, PPEP-2, PDB ID: 6FPC), as dependent variables. The structural parameters of QNs were used as independent variables to construct a QN double-activity 3D-QSAR model for determining the biotoxicity on ryegrass by employing the variation weighting method. This model was constructed to determine modification sites and groups for designing QNs molecules. According to the 3D contour map of the model, by considering enrofloxacin (ENR) and sparfloxacin (SPA) as examples, 23 QN derivatives with low biotoxicity were designed, respectively. The functional properties and environmental friendliness of the QN derivatives were predicted through a two-way selection between biotoxicity and genotoxicity before and after modification; four environmentally friendly derivatives with low biotoxicity and high genotoxicity were screened out. Mixed toxicity index and molecular dynamics methods were used to verify the combined toxicity mechanism of QNs on ryegrass before and after modification. By simulating the combined pollution of ENR and its derivatives in different soils (farmland, garden, and woodland), the types of combined toxicity were determined as partial additive and synergistic. Binding energies were calculated using molecular dynamics. The designed QN derivatives with low biotoxicity, high genotoxicity, and environmental friendliness can highly reduce the combined toxicity on ryegrass and can be used as theoretic reserves to replace QN antibiotics. View Full-Text
Keywords: quinolones; ryegrass; biotoxicity; molecular docking; 3D-QSAR; combined toxic effects of antibiotics; molecular dynamics quinolones; ryegrass; biotoxicity; molecular docking; 3D-QSAR; combined toxic effects of antibiotics; molecular dynamics
►▼ Show Figures 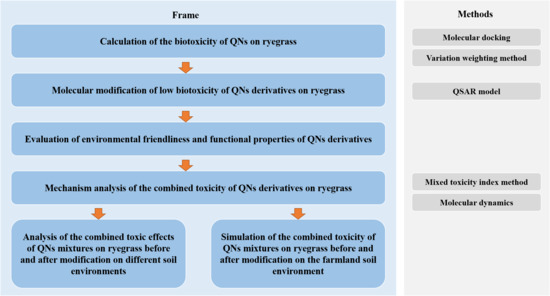