Evaluation of the Mitragynine Content, Levels of Toxic Metals and the Presence of Microbes in Kratom Products Purchased in the Western Suburbs of Chicago

Kratom (Mitragyna speciosa, Korth) is a tree-like plant that is indigenous to Southeast Asia. Kratom leaf products have been used in traditional folk medicine for their unique combination of stimulant and opioid-like effects. Kratom is being increasingly used in the West for its reputed benefits in the treatment of pain, depression and opioid use disorder. Recently, the United States Food and Drug Administration and Centers for Disease Control have raised concerns regarding the contamination of some kratom products with toxic metals (Pb and Ni) and microbes such as Salmonella. To further explore this issue, eight different kratom products were legally purchased from various “head”/”smoke” shops in the Western Suburbs of Chicago and then tested for microbial burden, a panel of metals (Ni, Pb, Cr, As, Hg, Cd), and levels of the main psychoactive alkaloid mitragynine. All of the samples contained significant, but variable, levels of mitragynine (3.9–62.1 mg/g), indicating that the products were, in fact, derived from kratom. All but two of the samples tested positive for the presence of various microbes including bacteria and fungi. However, none of the samples tested positive for Salmonella. Seven products showed significant levels of Ni (0.73–7.4 µg/g), Pb (0.16–1.6 µg/g) and Cr (0.21–5.7 µg/g) while the other product was negative for metals. These data indicate that many kratom products contain variable levels of mitragynine and can contain significant levels of toxic metals and microbes. These findings highlight the need for more stringent standards for the production and sale of kratom products. View Full-Text
Keywords: kratom; microbes; Salmonella; metals; Pb; Ni; Cr kratom; microbes; Salmonella; metals; Pb; Ni; Cr
►▼ Show Figures 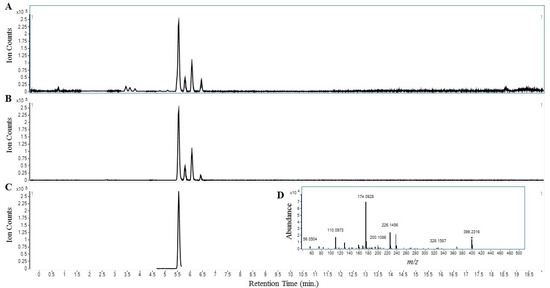