Family Communication and Verbal Child-to-Parent Violence among Adolescents: The Mediating Role of Perceived Stress
Next Article in Special Issue

Predictors and Trend in Attendance for Breast Cancer Screening in Lithuania, 2006–2014

In Lithuania, a Nationwide Breast Cancer (BC) Screening Program was launched in 2005, offering mammography for women aged 50 to 69 years, every other year. This study aimed to determine the trend in the attendance for mammography screening during 2006–2014 and to identify the factors that are predictive for participation in it. The study sample consisted of 1941 women aged 50–64 years, who participated in five cross-sectional biennial postal surveys of Lithuanian Health Behavior Monitoring, carried out in independent national random samples. The attendance for screening was identified if women reported having had a mammogram within the last two years. The proportion of women attending the screening was continuously increasing from 20.0% in 2006 up to 65.8% in 2014. The attendance for BC screening was associated with the participation in cervical cancer screening. A higher level of education, living in a city, frequent contact with a doctor, and healthy behaviors (fresh-vegetable consumption, physical activity, and absence of alcohol abuse) were associated with higher participation rates in BC screening. To increase BC screening uptake and to reduce inequalities in attendance, new strategies of organized BC screening program using systematic personal invitations are required in Lithuania. View Full-Text
Keywords: breast cancer; screening; trend; attendance; predictors breast cancer; screening; trend; attendance; predictors
►▼ Show Figures 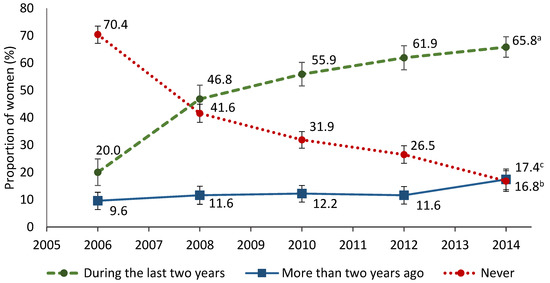