Promoting School Engagement in Children with Cerebral Palsy: A Narrative Based Program
Next Article in Special Issue

Chronic and Acute Toxicities of Aflatoxins: Mechanisms of Action
Previous Article in Journal

Sun Exposure of Body Districts: Development and Validation of an Algorithm to Predict the Erythemal Ultra Violet Dose
Previous Article in Special Issue

The Role of miRNAs in Zearalenone-Promotion of TM3 Cell Proliferation

Among the array of structurally and toxicologically diverse mycotoxins, aflatoxins have attracted the most interest of scientific research due to their high toxicity and incidence in foods and feeds. Despite the undeniable progress made in various aspects related to aflatoxins, the ultimate goal consisting of reducing the associated public health risks worldwide is far from being reached due to multiplicity of social, political, economic, geographic, climatic, and development factors. However, a reasonable degree of health protection is attained in industrialized countries owing to their scientific, administrative, and financial capacities allowing them to use high-tech agricultural management systems. Less fortunate situations exist in equatorial and sub-equatorial developing countries mainly practicing traditional agriculture managed by smallholders for subsistence, and where the climate is suitable for mould growth and aflatoxin production. This situation worsens due to climatic change producing conditions increasingly suitable for aflatoxigenic mould growth and toxin production. Accordingly, it is difficult to harmonize the regulatory standards of aflatoxins worldwide, which prevents agri-foods of developing countries from accessing the markets of industrialized countries. To tackle the multi-faceted aflatoxin problem, actions should be taken collectively by the international community involving scientific research, technological and social development, environment protection, awareness promotion, etc. International cooperation should foster technology transfer and exchange of pertinent technical information. This review presents the main historical discoveries leading to our present knowledge on aflatoxins and the challenges that should be addressed presently and in the future at various levels to ensure higher health protection for everybody. In short, it aims to elucidate where we come from and where we should go in terms of aflatoxin research/development. View Full-Text
Keywords: aflatoxins; liver cancer; public health risk; foods and feeds; control means; climatic change aflatoxins; liver cancer; public health risk; foods and feeds; control means; climatic change
►▼ Show Figures 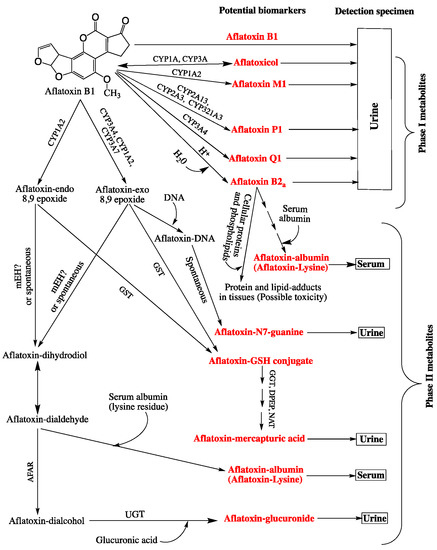 
Benkerroum N. Retrospective and Prospective Look at Aflatoxin Research and Development from a Practical Standpoint. International Journal of Environmental Research and Public Health. 2019; 16(19):3633.