Influence of Nano-Hydroxyapatite on the Metal Bioavailability, Plant Metal Accumulation and Root Exudates of Ryegrass for Phytoremediation in Lead-Polluted Soil
Previous Article in Journal

The Effects of PM2.5 from Asian Dust Storms on Emergency Room Visits for Cardiovascular and Respiratory Diseases
Previous Article in Special Issue

Bryophytes act as bioindicators and bioaccumulators of metal deposition in the environment. To understand the atmospheric deposition of heavy metals (cadmium (Cd), chromium (Cr), copper (Cu), mercury (Hg), nickel (Ni), lead (Pb), and zinc (Zn)) in Taizhou, East China, samples of moss (Haplocladium microphyllum) were collected from 60 sites selected by a systematic sampling method during the summer of 2012, and the concentrations of these heavy metals were determined by inductively coupled plasma atomic emission spectroscopy (ICP-AES). The results suggested that the concentrations of these metals varied moderately among different sites, indicating a similar contamination level for each element throughout the monitoring region. The mean values under investigation were higher than those from neighboring cities, such as Wuxi, Xuzhou, and Nanjing, and much higher than those in Europe based on a 2010 survey. Significant (p < 0.01) correlations were identified among some of the heavy metals, suggesting that these originated from identical sources. There was no statistically significant correlation between Hg and all the other elements. Spatial distribution maps of the elements over the sampled territory were created using Arc-GIS 9.0. The potential ecological risk index indicated that the air was heavily polluted by Cd and Hg, and that there was a considerable potential ecological risk from all the heavy metals studied. View Full-Text
Keywords: air quality; heavy metals; moss biomonitoring; contamination factor; ecological risk assessment; factor analysis; GIS technology air quality; heavy metals; moss biomonitoring; contamination factor; ecological risk assessment; factor analysis; GIS technology
►▼ Show Figures 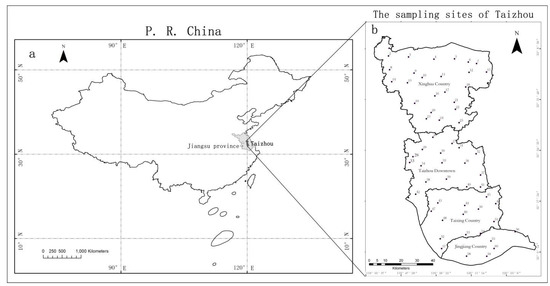